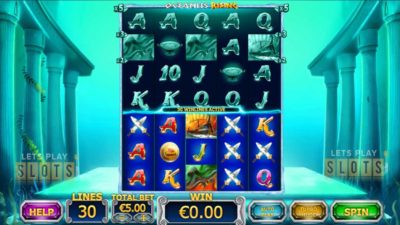 Greek mythology has a ton of gods so it can be confusing to hear about some of the gods they worshipped. The most popular Greek God associated with the seas is Poseidon.

However, there is an older god associated with the sea in the Greek pantheon. His name is Oceanus and he is the oldest Titan in Greek mythology. Playtech has decided to make him the focus of their latest offering called “Oceanus Rising“.

Oceanus is the “Father of All Waters” and he represents the great ocean. In this game, players are taken to the depths of his domain to play against the Titan. The game starts with the players presented with the grid in the middle of an undersea hall.

The game itself has five reels. The number of paylines and rows fluctuates. The initial one is that of three rows and 30 paylines. But with the bonuses, players can get seven rows and 70 paylines. The great thing about this game is that it is optimized to work on any platform. Whether it is a desktop or mobile platform, the game will look great.

The symbols available to the players start with the A, K, Q, J and 10 royals. These are the low-value symbols. For players who want big prizes, you will want to score red-eyed octopuses, sea monsters, golden bowls with gems, battleships and crossed swords. Oceanus himself shows up acting as the wild. He serves as a substitute for all other symbols.

The game is pretty simple when it comes to the bonuses. It only has one. Rising Respins offers players a chance to get another spin. It is also a pretty simple to get this bonus. Players only need to get a winning combination. Then they get a spin. The respin also gives players an additional row. Additional paylines are also added. This means that there are more chances of winning in every respin. The maximum, as mentioned earlier, is seven rows and 70 paylines.

Besides the higher chances of winning and more spins, players also get multipliers. The maximum that players can get is a 5x multiplier. Players will stop with the respins as soon they stop getting winning combinations.

Overall, the game from Playtech is a great to play despite its simplicity. The RTP for Oceanus Rising is 95.05 percent.

Hurray! There is a competition going between users of our site!
You have to do nothing, but browse out site, and win a daily prize. Click here to read more.
You current ranking:
Time Left: 57m 55s