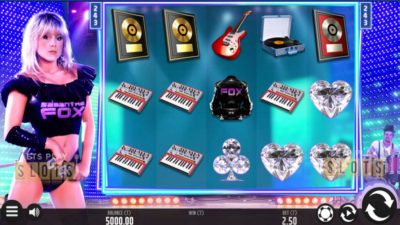 The younger generation of slot players would have probably never heard of Samantha Fox but the older generation will know the name. Samantha Fox was an iconic pin-up girl and model from the 80s. She was on just about every magazine cover during the 80s and now slot developer MGA Games is giving her new life in their latest slot aptly titled “Samantha Fox“.

Samantha was well-known for her singing and her beautiful looks and that’s precisely what dominates this game. Her name and image immediately greet players when they start this game up and it will be prominent as they play. There are neon lights and sexy dancing, while the audio effects are straight from the 80s with heavy electro-pop. Samantha herself is very visible on the side, dressed in a skimpy outfit.

As for the gameplay, the slot is very modern in design. It has five reels and three rows for the grid. The game has 243 ways to win, which means more chances for the player to bag a jackpot. The payouts for each win can be pretty low though, to make up for the fact of how easy it is to win. But the number of winning combinations adds up over time.

The symbols themselves are a mix. There are the playing card suits in diamond form. The more valuable symbols are music awards and instruments. Players can get up to 1000x their bet if they get lucky and win multiple paylines on a single spin.

Besides the basics, players will have a decent chance at some of the game’s bonus features. Four different mini-games can be unlocked. When players play the slots, they enable the games to be unlocked. When the bonus symbols are scored, they can then choose to play which mini-game they want.

The usual requirement for unlocking the games is winning a certain number of times. Players who win 256 times can then access either the Photo Shoot, which is a random raffle, or the Recording Studio, where players have to pick a winner among several prizes. Additional mini-games are available as players win more. The two best top ones are the Concert and Signing Off.

In Concert, several notes fill the screen. Players then have to pick the right one. Signing Off requires players to collect all three of Samantha’s top-selling albums for a massive bonus. Overall, MGA has done a good job with this slot and it is definitely worth a few spins to see Samantha Fox back in action.

Hurray! There is a competition going between users of our site!
You have to do nothing, but browse out site, and win a daily prize. Click here to read more.
You current ranking:
Time Left: 11h 22m 25s