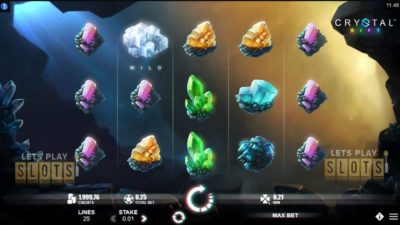 Microgaming is one of the most well-known casino software developers in the world and players are always on the lookout for new releases.

Developed by Rabcat, one of Microgaming’s software development studios, this game features some very impressive graphics and unique gameplay options.

In a statement, Gerhard Seiler, CEO of Rabcat said

Set in the depths of a gemstone-rich cavern, Crystal Rift delivers a truly unique player experience packed with win-boosting features and stunning visuals. We are proud to once again provide content exclusively to Microgaming.

The fascinating feature that makes Crystal Rift unique is that instead of a spinning reel, players are treated to falling gems every time they press the ‘spin’ or start autoplay. Now, this starts two features that are at the heart of the game: the bonus fall and the wild grid feature. Three hexes will appear on three slots, indicating that these will go wild if the wild grid activates.

If the wild grid hexes are fully filled up, which means three combinations have been won, then the wild grid activates. The gems in the hexes get turned into wilds. This means that there can be a lot more bonuses.

Microgaming Continues To Tie Up With New Studios

This great new game is a good sign that Microgaming‘s move to develop relationships with multiple development studios for new game creation has turned out to be a smart one. The company has recently added Fortune Factory and Slingshot Studios to its stable of studios. Rabcat has been with Microgaming since 2012 and has been making some really cool games during the last few years such as “Castle Builder“.

Hurray! There is a competition going between users of our site!
You have to do nothing, but browse out site, and win a daily prize. Click here to read more.
You current ranking:
Time Left: 13h 49m 35s
Gambling is for 18+ though some countries may have other restrictions...Remember you should always Gamble Responsibly
We use cookies to ensure that we give you the best experience on our website. If you continue to use this site you agree to allow us to use cookies, in accordance with our Terms & Conditions.Agree & Close