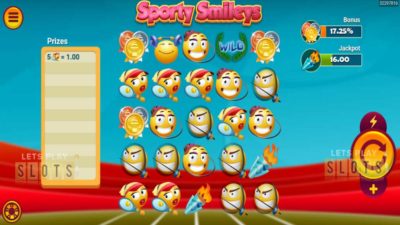 Players familiar with smileys and emojis will immediately recognise the theme of this game. It may seem like a weird theme but slot developers are always looking to come out with unique themes and make it work.

Mobilots decided that emojis and smileys are unique enough to turn them into a slot and you get to be the judge when you play their new slot “Sporty Smileys“!

There is no storyline to this game. It is essentially about matching the smiley faces. When players start this game up, they are taken to a yellow grid, with a rather weird mix of symbols. Mobilots was aware that the theme was pretty thin so they decided to add a bit of sport into the game.

The symbols that players will be hoping to match will be the various sports. This includes most of the Olympic sports. Overall, it looks pretty good on the graphics end.

The game does not have a strong theme but it is still interesting. It features a 5×5 grid. The unique thing about this game is that it doesn’t use the standard paylines used by other games. It uses the Clusterpays format. This means that instead of lines, players are aiming to get clusters of symbols. Players need a minimum of four symbols to score a winning combination. The biggest combination is 15 symbols.

The basic game is fun enough but Sporty Smileys does have two special bonuses. First, there is the normal bonus game. The bonus symbol always has a chance of appearing during a spin. When it does appear, it usually comes in a different shape. This is collected and added to a bar on the side. When a certain number of symbols is reached, an instant cash win will then be awarded.

The jackpot feature of the game also works in the same way. When it appears, it adds to the jackpot meter on the side of the screen. When it is full, a random jackpot prize is awarded. The minimum award is around $50.

While there is a potential for you to have a big payout with Sporty Smileys, chances are you going to win small prizes but a little more frequently. Do try it out and see if this new game is something that will hold your interest!