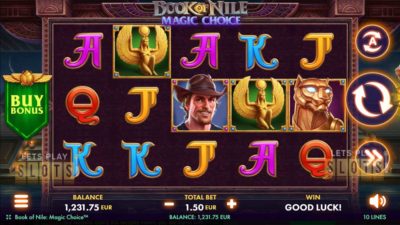 When players start this game up, they are presented with a nighttime setting. A purple backdrop dominates the scene as they are shown the stairs of a temple, with the river Nile making its rushing noise in the back. Players then see the five reels and three rows on the grid. There are 10 fixed paylines which is the usual standard.

One concern that players might have is the betting range. Players can only wager from $0.10 to $10, which is very limiting. The low bets will be attractive to those who have limited funds but high rollers will not be happy with it. This game has an RTP of 96.01 percent.

Players will be dealing with a mix of symbols in this game. The card royals are the game’s low-value symbols. Players who score them will need to get five on a payline to get the big 1500x payout. There are also thematic symbols which are the higher paying symbols. This includes the cat, statues, and the explorer. The explorer gives out the biggest payout of 50,000x.

The game has some interesting special features. The star of the show is Eye of Horus. It is the game’s Wild symbol. This allows it to substitute for all the regular symbols and delivers its own payout of 2000x when five are scored.

Players will also want to score the Book symbol. Players who land at least three of the books will get ten free spins. Before it begins, players get to choose one symbol. For the entirety of the free spins, that symbol will expand when it lands.

Go ahead and give Book of Nile: Magic Choice a few spins when it shows up at your online casino.

Hurray! There is a competition going between users of our site!
You have to do nothing, but browse out site, and win a daily prize. Click here to read more.
You current ranking:
Time Left: 3h 4m 21s