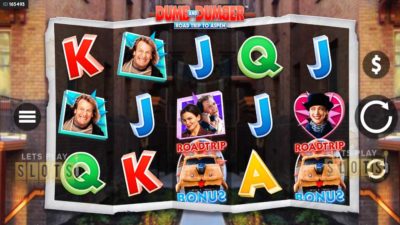 Veteran slot players are always looking for new developers who release unique slot games. They will be impressed with new developer Playzido who decided to create a slot based on one of the best comedy films from the 1990s.

Dumb and Dumber which was a box office hit features the idiotic pairing of Harry and Lloyd who keep the audience in spits. Playzido used this movie as their theme and came out with “Dumb and Dumber: Road to Aspen“.

This game takes players on the same road trip as in the movie and gives players the chance to experience all the fun with some wild prizes being given out along the way.

When you play this slot game, you will immediately recognise the setting. It may look like a blank apartment backdrop but the symbols on the reels show off the characters of the film. The game has a five-reel and twenty-payline format.

Players will look to get winning combinations. The lower-value symbols are the card royals while the more valuable symbols are characters from film. Players who want to win big should aim to score Harry (Jeff Daniels) and Lloyd (Jim Carrey). They both offer payouts of 2.5, 5 or 25 times a player’s stake. The payout depends on how many of the symbols land in a payline.

Besides the basic symbols, there are three additional symbols. The first come in the form of two wilds. One of them is the Petey Wilds which expand and fill a full reel when they land. The other wild is Lloyd the chauffeur and when it lands, it drives across the screen, leaving a trail of wilds in its wake. Finally there is the bonus symbol, which triggers one of many bonus features.

When the bonus symbol is scored, players get to spin the bonus wheel. This determines what sort of bonus they get. Players can get the Truck Stop Bonus feature which forces them to play a matching game for prizes. Others bonuses like the Dante’s Inferno Bonus feature offer free spins with special multipliers.

The Lost in Nebraska Bonus feature is one of the more lucrative features since it offers players a chance to win big prizes since every square that lands awards a prize. There is also the Preservation Gala Free Spins feature which is like the Dante’s Inferno feature but more profitable.

Overall, this game is a fun diversion with some good prizes at stake. Give it a spin when it hits your favourite online mobile casino.

Hurray! There is a competition going between users of our site!
You have to do nothing, but browse out site, and win a daily prize. Click here to read more.
You current ranking:
Time Left: 22h 40m 47s
Gambling is for 18+ though some countries may have other restrictions...Remember you should always Gamble Responsibly
We use cookies to ensure that we give you the best experience on our website. If you continue to use this site you agree to allow us to use cookies, in accordance with our Terms & Conditions.Agree & Close