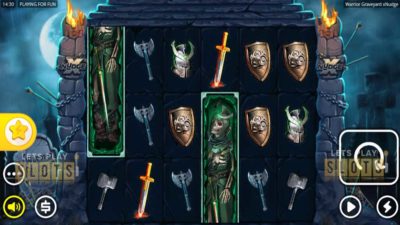 Nolimit City has decided to follow up on the original Barbarian Fury slot game with its latest release “Warrior Graveyard xNudge”. The dark and sinister theme takes players into the graveyard and has them fighting for their life.

Players are taken to the graveyard of fallen warriors and from here they will have to start fighting hard against evil forces.

As the sequel to Barbarian Fury, the game features an incredible soundtrack along with fantastic graphics. Players who like dark themed slots, will have a good time spinning the reels on this one.

As for gameplay, this slot features six reels and three rows.

There are 25 paylines to work with and players will only need a minimum of three matching symbols to get a win. Players can wager from 25p to £125 a spin. This is a good range since it allows for budget players as well as high rollers a chance at some good wins.

The game’s symbols are all thematic. The low-value symbols are all weapons and armor. The high valuable symbols are the dead warriors. There are all different and are found in coffins that occupy the entire reel. The most valuable can reward 6x the player’s stake on a full combination.

Considering the max payout is 9,797x and the game has an RTP of 96.14 percent, this game is definitely worth your time.

The game also has some great special features which involve the wild and scatter symbols. First, there is the xNudge Tombstone Wilds feature. This usually involves a large wild tombstone wild taking over an entire reel. The game will always nudge it so that it becomes fully visible on the reel. For every nudge position, the game will give out a multiplier. These multipliers can stack up, so there is a potential for big wins.

Next, there is the Warrior Attack feature. When three of the same warrior symbols appear on the reels, the symbol is nudged and a similar multiplier bonus as the Wilds feature activates. Players will then see all symbols move to the left to give a payout. This can combine with the Tombstone Wild feature for even bigger wins.

Finally, there are is the Graveyard Spins and Death Spins feature. These are free spins that are activated by the scatters. Graveyard spins are activated when you get three to five scatters and they give players up to 12 free spins and win multipliers with wilds. Death Spins is what players get with six scatters and they receive 14 spins and sticky wilds.

Go ahead and try Warrior Graveyard when it shows up at your online casino.

Hurray! There is a competition going between users of our site!
You have to do nothing, but browse out site, and win a daily prize. Click here to read more.
You current ranking:
Time Left: 5h 36m 41s