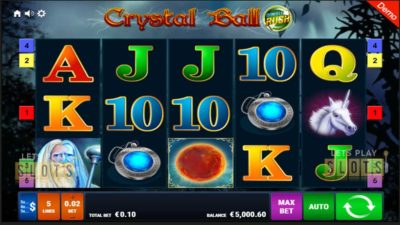 Crystal balls have long been associated with seeing the future and magic. Gamomat is using this as their theme for the latest offering titled “Crystal Ball: Double Rush“.

In this game, a dark magician seeks to control a magical kingdom using the powers of his magical crystal ball.

The setting is inside a dark forest which sets the atmosphere for the full game. Combined with the background music, players will find this slot interesting from start to finish.

The game’s grid is the standard five reels and three rows. The problem is that there are only five paylines available.

This should limit the amount of wins players can get. Fortunately, the game makes up for it with a good RTP of 96.12 percent.

Player bets are also limited and we must admit pretty unattractive. The range is only from $0.10 up to $1. This means that this game is only going to appeal to new players and those that have a very limited bankroll.

The game’s symbols are the usual mix. There are the card royals which don’t pay so well then there are theme symbols. These include potions, a blue token, a unicorn, and the dark wizard. The wizard is the most valuable among them.

The game has only one special symbol. The Crystal Ball acts as both the Wild and the Scatter. As the Wild symbol, it replaces all other regular symbols in the game. This can greatly help a player get a win. As the scatter symbol, the crystal ball triggers the free spins.

There are a couple of special features in this game. First, there is the Double Rush feature. This is part of the title and triggers every time a player bets. The reels will spin two times instead of just the normal one.

Finally, there is the Gamble feature. It allows players to double their winnings if they win. But they can also lose it if they get it wrong.

Overall, Crystal Ball Double Rush is a great game and is ideal for new players.

Hurray! There is a competition going between users of our site!
You have to do nothing, but browse out site, and win a daily prize. Click here to read more.
You current ranking:
Time Left: 9h 36m 2s