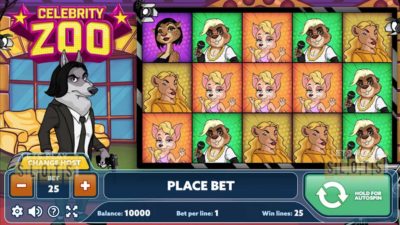 PlayPearl brings something unique to the table with its new “Celebrity Zoo” game.

Players are treated to an experience where some of the most famous celebrities in the world are changed into to animal forms. The theme is definitely funny and the developers have done a good job with the graphics and gameplay.

Players are presented a talk show-themed setup, with the animal host to the side. The soundtrack reflects the fun atmosphere of the game.

As for gameplay, the grid has five reels and three rows along with 25 paylines to work with.

One thing that a lot of players will not like about this game is the low betting limits. They start out at $0.25 minimum and have a maximum of $25. The $0.25 range makes the minimum bet a little high for some players who prefer games that start out at $0.10. The low $25 max bet will discourage high rollers as the big payout is not possible in this game.

However, if you are looking for an interesting theme and a chance at decent payouts, give this game a few spins. The game has several symbols that represent the various celebrities who have been changed over to animals. There are eight main celebs: Cristallion Rolando, Keanu Wolves, Ariana Grandeer, Justin Beaver, Maris Pilton, Savanna, Lionce and The Stone. The Stone is the most valuable symbol and pays out the most.

The game also has three special symbols. One is the Wild. The others are the Bonus and the Scatter symbols.

The game has several special features that can spice things up. First, the Wild symbol acts as any regular symbol so it increases the chance of winning. It doesn’t work with the Bonus and Scatter symbols but those two have other purposes.

Next, the game has Free Spins. Players need to score three or more scatters to trigger it. With three scatters players get 10 free spins. At maximum, players can get 30 free spins. The Bonus game comes from the microphone bonus symbols. Players can score three microphone symbols and they get the Casting Bonus. Players then have to find the green signs among a set of hidden choices. Getting green signs will increase the total win counter

The Paparazzi bonus if for when players score the other bonus symbol, which is a camera. Players then hope to catch a silhouette and take a picture. Players can have up to eight chances to get it right and get a bonus. This game has an RTP of 95.04 percent.

Hurray! There is a competition going between users of our site!
You have to do nothing, but browse out site, and win a daily prize. Click here to read more.
You current ranking:
Time Left: 25m 46s