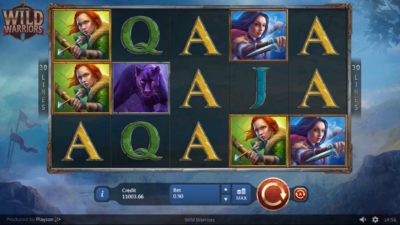 Players in the mood for warrior action should try out Playson's newest offering. “Wild Warriors” is a fantasy slot game that features four warrior women fighting it out on a fantasy battlefield.

This five reel, 30 pay line slot will give players a great gaming experience. Playson initially scheduled the launch for Nov 22 but has released Wild Warriors earlier.

Slot lovers who have never tried a Playson offering should give Wild Warriors a try as they will quite enjoy Playson's skilled game design.

When players start the game, they will be taken into a fog-shrouded battlefield with flags waving in the wind. The visual design is pretty good and the sounds in the background are appropriately tribal battle sounds that give you the feel of battle. There is actually a hint of the Game of Thrones theme somewhere in there.

The lower paying symbols for the game are the usual card symbols. For those who want to score big, they will want to get the more valuable warrior women who wield a wide variety of weapons. There is also a panther included. Players will get to play the game on various devices and they can bet from 30 pence to 90 pounds, depending on how lucky they feel.

The most valuable of the warrior women is the blonde wielding a sword. The game delivers a payout of 1.5 times the player's original stake when you score five of the symbols. Winning combinations start from the left to the right, with a minimum of three symbols.

Wilds and scatters give out the biggest payouts. If a player scores five wilds in a pay line, they get 33.33 times their original stake. This is beside the fact that they also contribute to other winning combinations.

Scatters are more impressive. They are found in the three middle reels and they appear in batches of three on the reels. This means that players can score up to nine of them. If a player scores at least seven, they activate the free spins feature. Depending on how many they scored, they can get 8 to 25 free spins – with all of the warrior women spinning as large blocks on the reels. This means it is easier to win and there's a good chance of winning

Hurray! There is a competition going between users of our site!
You have to do nothing, but browse out site, and win a daily prize. Click here to read more.
You current ranking:
Time Left: 3h 38m 37s
Gambling is for 18+ though some countries may have other restrictions...Remember you should always Gamble Responsibly
We use cookies to ensure that we give you the best experience on our website. If you continue to use this site you agree to allow us to use cookies, in accordance with our Terms & Conditions.Agree & Close