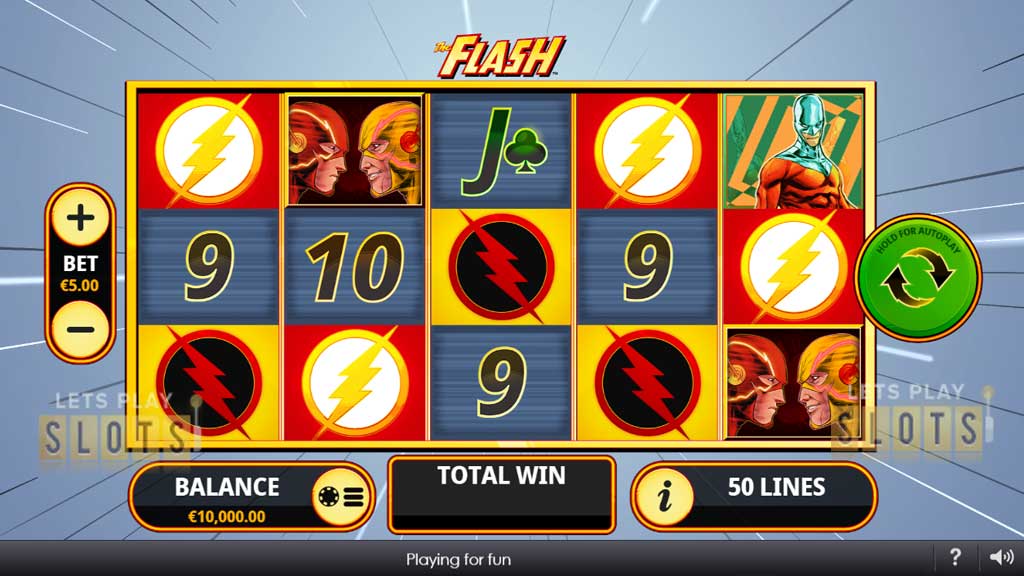 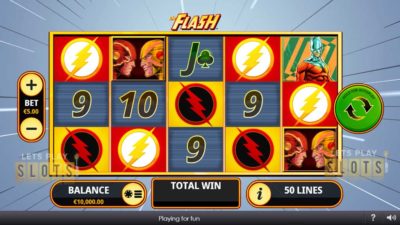 Playtech continues its DC publishing push with its latest ‘The Flash’ slot game. In this game, players are helping out the scarlet speedster as he goes up against his most dangerous foes. As part of the DC series, this game features art from the comic books and some interesting features. Plus, if they’re lucky, there’s a chance that players will hit the DC Super Heroes Jackpot.

The gameplay of this slot is pretty basic but there are some touches that make it special. When players launch this game, they will be greeted by a simple five row, three reel setup. There are as many as 50 paylines available which means players have a good opportunity to win multiple combinations on a spin.

Players should be familiar with the symbols being used. The card symbols are the low-value symbols. The more valuable symbols are from Flash’s Rogue’s Gallery of villains and the Flash himself. There are also two Flash logos that show up. One is the main Flash and the other is the Reverse Flash. The Flash symbol is the most valuable, with players getting 40 times their stake if they get five of it on a payline.

The Flash himself also acts as a wild symbol. This means he can act like all other symbols except for the scatter. Besides this, a Random Wild symbol can sometimes be added during a spin to add to the winning potential.

There are a couple of interesting features in this game. First, there is the Battle Feature. This happens when five Flash and Reverse Flash scatter symbols appear on the reels. Players get five times their stake and then get to choose who wins: the Flash or his nemesis. There will be five bonus prizes available that can boost a win up to 100 times a player’s total stake.

A series of Free Spins begin where the two speedsters battle each other for prizes. The Reverse Flash claims a prize if he lands on reel four and the Flash gets one if he lands on reel two. The spins continue until all the prizes are claimed. If a player correctly selects who won more prizes, they get all of those bonus prizes.

Besides this feature, players can also join the DC Super Heroes Jackpot feature. This is randomly triggered and players will have the chance to win one of the major jackpots, if they pick right from a choice of 20 balls.

Overall, this game is great fun. Players should try this game out when it hits their favourite online casino to experience some superhero fun.

Hurray! There is a competition going between users of our site!
You have to do nothing, but browse out site, and win a daily prize. Click here to read more.
You current ranking:
Time Left: 5h 52m 23s