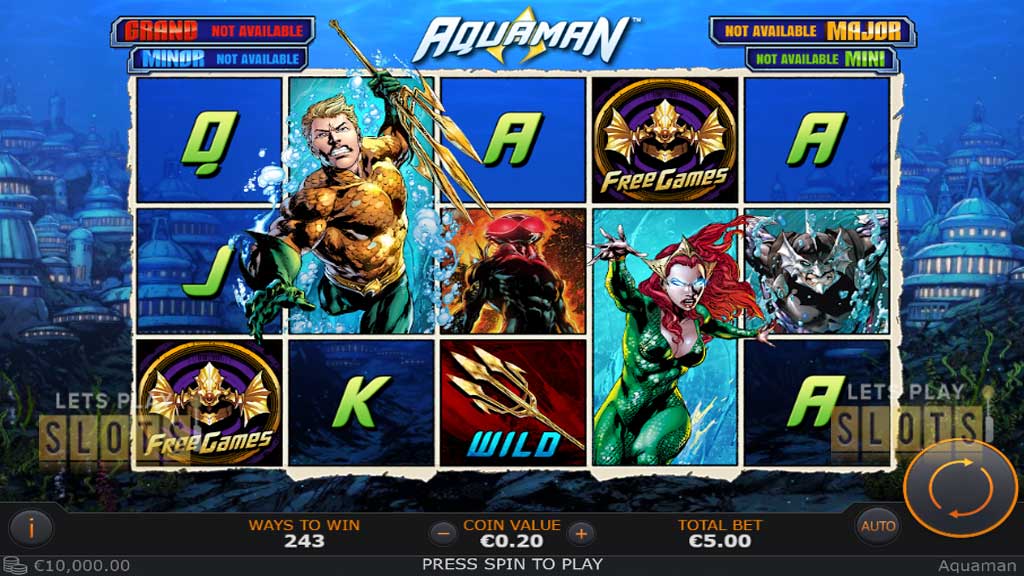 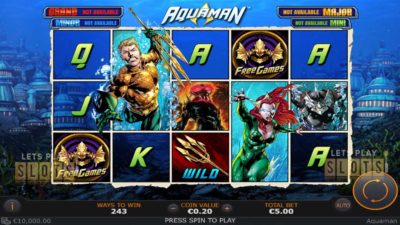 Aquaman starring Jason Momoa is set to hit movie theatres on 14 December and fans are eagerly awaiting its release. Playtech decided to develop an Aquaman themed slot which features art from the original DC comic’s series and not the movie.

Playtech is yet to roll out the game on a full-fledged basis but selected online casinos are already carrying Aquaman. While the game is not based on the movie, it still offers players great action and a lot of fun.

Players will be helping Aquaman and Mera defend the underwater Atlantis city from the various forces of evil.

The Aquaman slot game features five reels and 243 ways to win. Aquaman is visually stunning and also has great gameplay. Using comic visuals, there’s a lot more action going on in the pictures. Plus the background of Atlantis and some fantastic music helps make it a lot of fun.

For low-paying symbols, there are the traditional card symbols for the game. These only give out just a fraction of what players would get if they get the more valuable symbols. The next level of symbols are the villain symbols. There are three villain symbols and Aquaman and Mera. Aquaman is the highest paying symbol of the bunch, paying out 20 times the initial stake.

The game has some special features. For example, when Mera fully lands on reel 4, which means all three rows show Mera’s full symbol, it activates the Ocean Rush feature. This means a symbol will be locked in position and players get a free spin. Aquaman, on the other hand, will show up on reel 2. He throws his trident on the reels and replaces three adjacent symbols into wild symbols.

The Wild and Scatter symbols are important for the special bonuses. The Wild for this game is Aquaman’s trident and it will act as any other symbol except for the scatter. This makes it valuable for getting winning combinations. Plus, getting a wild can multiply a player’s win amount, at best quadrupling it depending on the number of wilds in the combination.

The Scatter symbol is the Free Game symbol. It activates, if at least three of them match in a payline. This then gives players up to 16 free spins. During the game, players are hoping to collect the special golden Aquaman symbol to convert all villain symbols into Aquaman symbols. This can potentially have a large jackpot.

Comic lovers will love this game, especially since it combines with DC Super Heroes Jackpot Network.

Hurray! There is a competition going between users of our site!
You have to do nothing, but browse out site, and win a daily prize. Click here to read more.
You current ranking:
Time Left: 2h 57m 14s
Gambling is for 18+ though some countries may have other restrictions...Remember you should always Gamble Responsibly
We use cookies to ensure that we give you the best experience on our website. If you continue to use this site you agree to allow us to use cookies, in accordance with our Terms & Conditions.Agree & Close