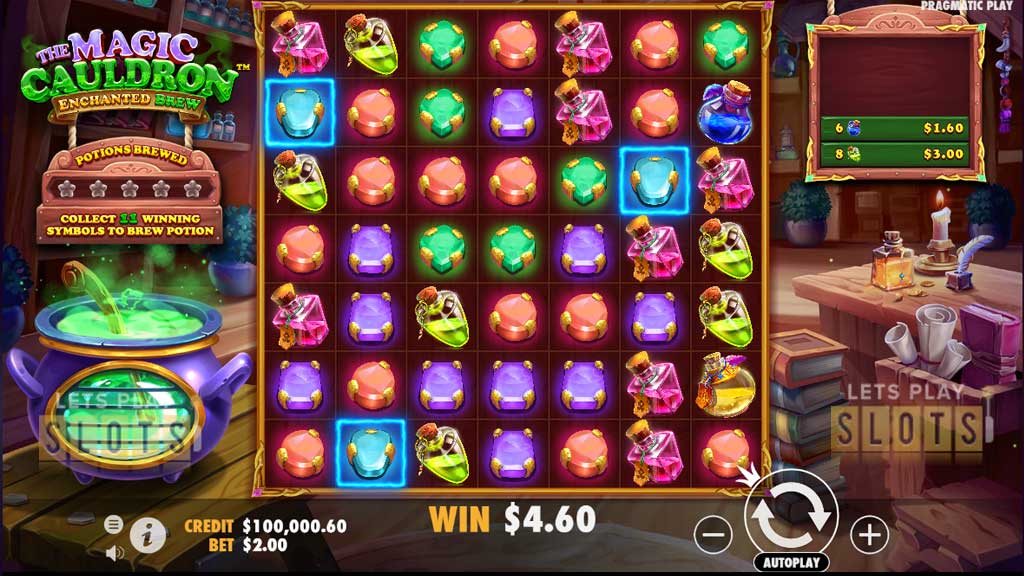 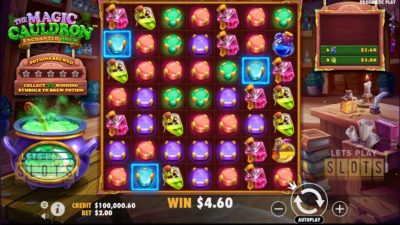 Pragmatic Play is cooking up something interesting for its dedicated players with its latest the “Magic Cauldron Enchanted Brew” slot.

Players are presented with a magical theme slot and are whisked off to a laboratory where they will they see a cauldron ready to cook something up for everyone.

The developer has done a good job with the graphics and a catchy soundtrack sets the mood.

All of the action takes place on a grid that has seven reels and seven rows. To make things more interesting, the game also uses the cluster pay system.

Players need to match a cluster of five or more symbols to get a win. This game offers a max cash jackpot of $50,000 which is pretty big and should attract a lot of players.

The game has a nice set of symbols. The least valuable ones are the four precious gemstones. The next level up is the four different potions. Interestingly, the game has two special symbols. One is the Dark Grimoire which acts as the normal Wild for this game. During special games, the Unicorn Wild shows up.

The betting range for this slot is also pretty good. Players can start small at $0.20 and go all the way up to $100. This betting range will appeal to a wide spectrum of players as both low stakes and high stakes players can get in on the action.

The game has some interesting special features and they mostly stem from various signs and symbols. All of the winning symbols go into the cauldron during the game. Once there are enough symbols of a certain type, the game will reward players.

However, the reward is random and can be interesting. There are five random modifiers but the most important ones are the Potion of Darkness or Unicorn Dust. They can either remove all the high-paying symbols or the low-paying ones. Additionally, giant symbols will show up, The Potion of Darkness also replaces the symbols with high-paying ones while the Unicorn Dust added Unicorn Wilds to the grid.

There are still more special features that can get triggered. One of them is the Elixir Wilds. When a player does not win, the game spawns up to eight Wilds on the grid. There is also the Moon Seed Mark which converts winning combinations into Wilds. If you like a game that is packed with special features, you should definitely spin the reels on this one. Magic Cauldron Enchanted Brew has an RTP of 96.44 percent.

Hurray! There is a competition going between users of our site!
You have to do nothing, but browse out site, and win a daily prize. Click here to read more.
You current ranking:
Time Left: 16h 33m 14s