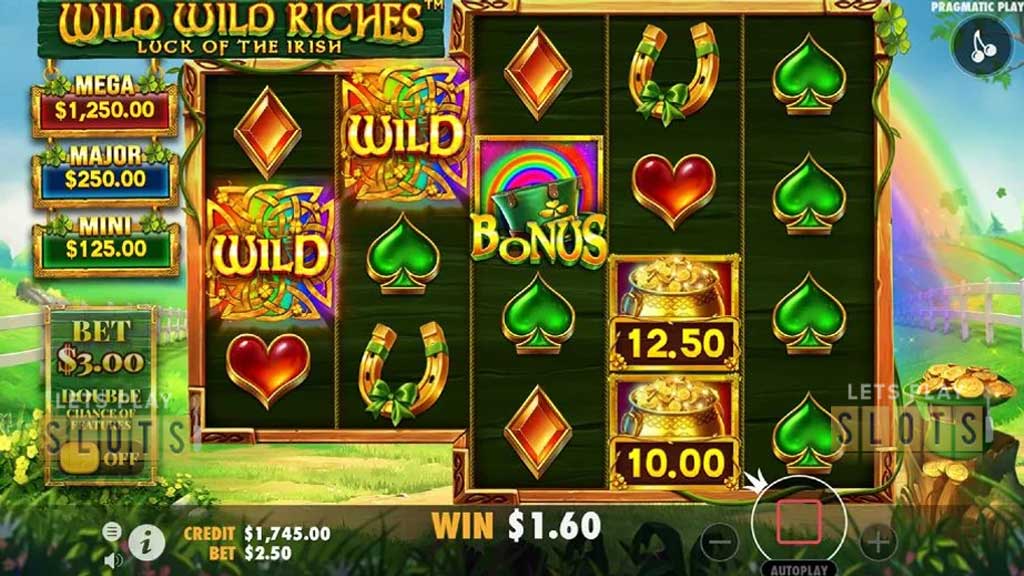 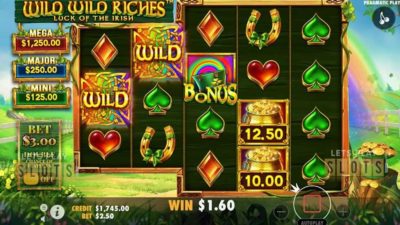 Pragmatic Play has decided to release a new slot called “Wild Wild Riches” that focuses on the luck and legend of some great Irish history. This game will give players a chance to experience adventure, excitement and to test and see if they have the “Luck of the Irish“.

Players who start this game up are greeted with a beautiful farm in the green fields of Ireland. The grid is in the middle of wooden boards and an Irish tune is piped in the background. It looks very peaceful and serene. The game’s symbols are the usual mix. There are the card suits for the low-level symbols. There are also the thematic symbols from pipes to mushrooms.

The grid itself looks unusual. There are five reels but the first two only have three rows. The remaining reels have four rows each. Players will have 576 ways to win, with the usual three symbol combinations. Players have a betting range from 25 cents to 125 dollars. The RTP for the game is a high 96.77 percent.

The game is rich in special features. For one, there is the Wild. This replaces any other symbol in the game. But it only appears in the first two reels. There is also the Bonus symbols, which is a green hat. It only appears in the third reel. Players who get the combination of two Wilds on the first two reels and a Bonus symbol on the third will get 10 Free Spins. These spins will have more Wild symbols appearing along with the Money symbol.

The Money symbol appears on reels three, four, and five. They are pots of golden coins with a monetary value placed on them. But they don’t give players wins on their own, they have to combine with at least two Wild symbols. Players who score the Money symbols will be able to get one of the three available jackpots. The biggest jackpot available is the Mega Jackpot which is 500 times the player’s stake.

Players will be able to trigger special features more often. They can do this by activating the Ante Bet option. This increases the player’s bet by 20 percent. In exchange, the game has a better chance of landing Wilds on the first two reels.

Overall, the game is pretty complex but can be very rewarding. Do give Wild Wild Riches a few spins when it shows up at your favorite online casino.

Hurray! There is a competition going between users of our site!
You have to do nothing, but browse out site, and win a daily prize. Click here to read more.
You current ranking:
Time Left: 18h 39m 36s
Gambling is for 18+ though some countries may have other restrictions...Remember you should always Gamble Responsibly
We use cookies to ensure that we give you the best experience on our website. If you continue to use this site you agree to allow us to use cookies, in accordance with our Terms & Conditions.Agree & Close