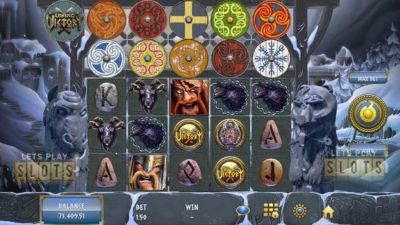 The Norse Vikings believed their gods were responsible for giving them mystical powers that helped them win in battle. Rival Gaming has decided to bring this experience to life in their new game titled “Viking Victory“. Players are taken to the frozen North as they seek to reach Asgard.

Rival has done a great job to bring this theme to life and the background music gets you in the mood for victory!

Players are presented with a standard grid of five reels and three rows along with 243 ways to win. The grid is placed in the middle of the frozen wasteland where all of the action takes place.

The betting range in this game is interesting as the minimum bet starts at $0.30 and the max bet is fixed at $75. A lot of slot players prefer games which have a lower minimum bet of $0.10 and hence low rollers will stay away from this game.

You have a good mix of thematic symbols in this game. The highest tier of symbols are the Viking gods Odin, Freyja, Thor and Freyr. The next level is the various animals which include bears, wolves, goats, ravens and reindeer. The lowest level is the card royals. There are also two special symbols. They are the Magic Coin which acts as the Wild, while the Medallion of Odin stands for Scatter.

The game has several special features that make things more exciting. Players will have the Wild symbol to make wins easier as the wild substitutes for all the regular symbols. Then there is the drop feature. Every winning combination is removed to allow for more symbols to drop drown so more combinations can come out.

You will also find the Journey to Asgard feature. Players need to score three or more scatters to trigger the feature which gives out up to 15 free spins. The great thing about this feature is that players will get to see a bigger grid with four rows that gives them 1,024 ways to win. Players who score a Wild will also get an x3 multiplier.

Players can get even luckier if they score three or more scatters again during the free spins. This is when the Glory of Valhalla feature activates. Players get even more free spins but also see the grid become a 5×5 one and have 3,125 ways to win. Wilds will also have an x9 multiplier if they are part of a win.

Hurray! There is a competition going between users of our site!
You have to do nothing, but browse out site, and win a daily prize. Click here to read more.
You current ranking:
Time Left: 6h 30m 36s