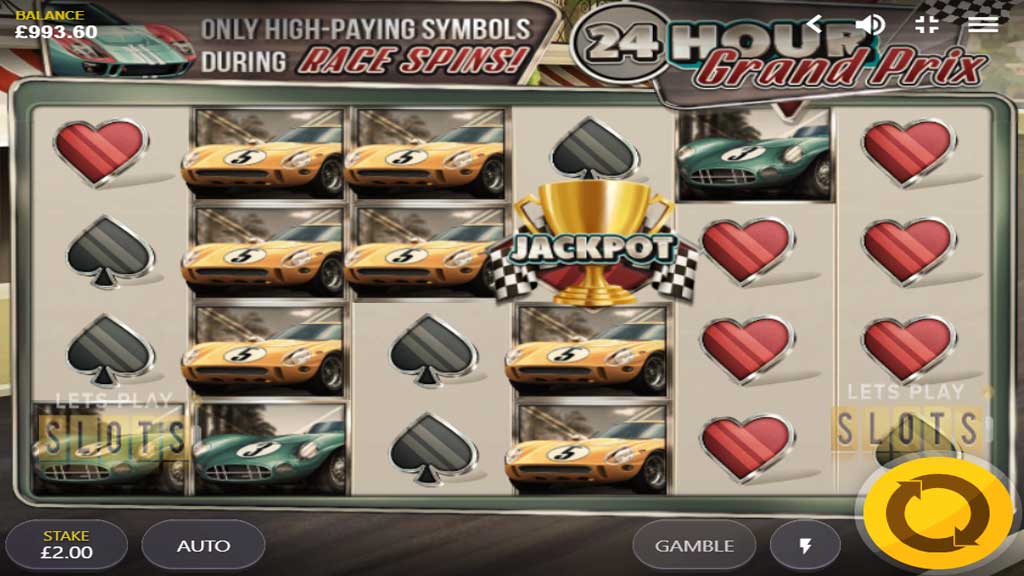 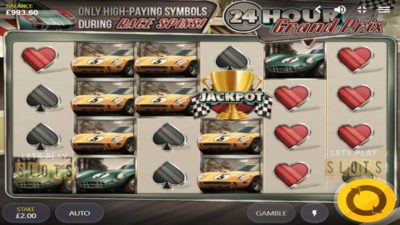 When you think of racing, you don’t often think about endurance. But that is exactly what endurance motorsports is all about. Combining speed with durability, these special races focus on cars being able to run a 24-hour race. Red Tiger Gaming has decided to use this style of racing as their main theme in their latest offering: “24 Hour Grand Prix“.

Players who start up this game and will immediately see the track where the race will happen, along with the checkered flag and the city in the background. The race track setting will get players in the mood and the pleasant rock and roll tune will get them relaxed.

As for the game’s grid, players will be playing with a 6×4 grid, which is bigger than normal. There are also 30 paylines on offer, which means there is a decent chance for a win. However, the game’s RTP is pretty low. It is around 93.73 percent which can be discouraging. To counter the low RTP, Red Tiger Gaming decided to make it more volatile, with the highest payout being 2,166 times the player’s original stakes.

The symbols for the game are the usual mix of cards and thematic symbols. For this game, the playing card suits are the low-value symbols, while fast cars are the more valuable symbols for this game. When players score a win, they are treated to some animation as the checkered flag waves and coins fly on the screen. The reels will also be covered by tire tracks.

Besides the free spins, there is also the Super Wild symbol. It does not appear through the spins though. It is only through matching two of the same car symbols. A 2×4 Wild symbol then shows up, which adds to the chances of winning. Players can also gamble on their wins. They can double their win or lose it all with a spin on the Gamble wheel.

Finally, the game is part of a progressive jackpot network. Those who are lucky would be able to score the big jackpot from the jackpot wheel. Overall, the game is pretty fun and is definitely worth a few spins.

Hurray! There is a competition going between users of our site!
You have to do nothing, but browse out site, and win a daily prize. Click here to read more.
You current ranking:
Time Left: 12h 46m 23s