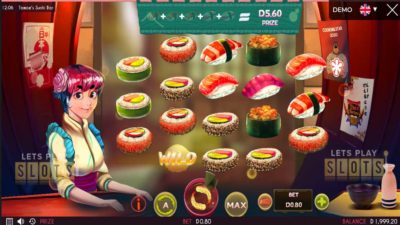 Japanese cuisine is popular around the world and one of the dishes that is loved by millions of people worldwide is Sushi.

The raw fish and rice delicacy are connected deeply to Japanese culture and tradition.

This is where Triple Cherry has drawn its inspiration for in its latest slot offering titled Tomoe’s Sushi Bar.

Players are taken to this special restaurant where they are greeted by a grid on the sliding door of the place. Players will get to sample some authentic sushi dishes with oriental music playing in the background.

The grid is very interesting. Instead of the normal square one, players are treated to a 3x4x4x4x3 grid. There are 40 paylines, so players have a good chance of walking away with a win. The game has 16 symbols, which is an impressive number. Most of them are inspired by sushi dishes. There is also a Wild symbol to keep things interesting.

The betting range is pretty large since the minimum bet is at 0.8 coins and it goes up to 4,000 coins. This gives players a chance to wager as much big amounts. It is up to each player as they can choose to be very conservative or they can bet it all.

The game has some interesting special features. There is the usual Wild symbol which replaces any of the normal symbols in a combination. Players will want to get the maximum amount of Wilds in their game, which is a total of five on a payline.

Another special feature is the recipe feature. Players will see a set of symbols on top of the grid. This is the set meal that they need to collect. When players collect all the ingredients, they will get a big 40x bonus on their stake.

There is also the free spins feature. Unlike normal free spins, players will have to get a certain set of ingredients. These are two sets of Salmon Nigiri and Tuna Nigiri. Players will then get a chance at eight free spins.

Triple Cherry used HTML5 to develop this game, which means it is compatible with mobile platforms, enabling you to have fun while on the go. Overall, Tomoe’s Sushi Bar is a very interesting game and deserves a few spins when it arrives at your favorite online casino.

Hurray! There is a competition going between users of our site!
You have to do nothing, but browse out site, and win a daily prize. Click here to read more.
You current ranking:
Time Left: 2h 3m 36s