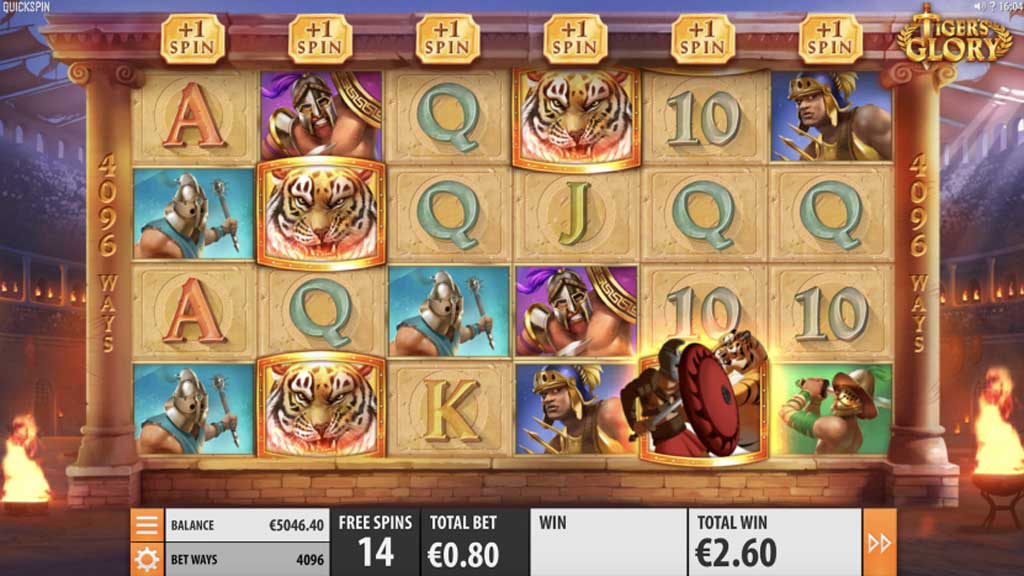 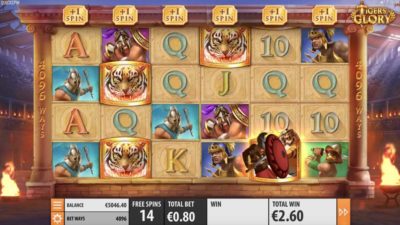 Fans of the movie “Gladiator” and other films about the glories of Imperial Rome will appreciate the joys of playing the new Tiger's Glory slot game from Quickspin.

Though the official release for the game was scheduled for November 13, ComeOn Casino has gotten exclusive rights to allow players to enjoy it early. This game is sure to be a slot lover’s dream because of its great graphics and excellent gameplay.

Tiger's Glory features a special six reel display that is packed with a number of bonuses and exciting features. Players will have 4,096 ways to win and will be able to enjoy this game on a variety of platforms starting from their desktop to their mobile devices.

The game features the standard symbols when it comes to a low-ranking score. However, the ancient Roman theme starts to seep through once the players start scoring the higher symbols. These are the tiger and gladiators. There are four different gladiators and they correspond to the higher score symbols. The Enraged Tiger is the most valuable symbol. Players who line up six tigers will get ten times their original stake.

Winning combinations are scored by getting at least three of the same symbol consecutively into a single pay line starting from the first reel. With six reels, there are a lot of chances of winning. There are two more symbols that help contribute to the win though.

First, there is the wreath which acts as a wild symbol and can be any symbol except for Bonus scatter symbol and the Enraged Tiger. The Bonus symbol triggers special bonuses that will give players a chance to win big.

The bonus symbol will activate when a player gets at least three symbols. Depending on how many bonus symbols are scored, they will be able to get a number of free spins. The most they can get is 20 free spins. During these free spins, it is lot easier to win since the Enraged Tiger symbol pays anywhere and winning combinations don't need to start from the first reel or need to be consecutive.

The Enraged Tiger symbol will trigger as it battles the Gladiator. If the tiger wins, it will lock in position. Every tiger win will also give players another free spin. This means that players will have the most valuable symbol locked in plus they get another free spin during the bonus. The game can potentially pay out 13,830 times your total stake during the bonus round.

Hurray! There is a competition going between users of our site!
You have to do nothing, but browse out site, and win a daily prize. Click here to read more.
You current ranking:
Time Left: 7h 16m 15s
Gambling is for 18+ though some countries may have other restrictions...Remember you should always Gamble Responsibly
We use cookies to ensure that we give you the best experience on our website. If you continue to use this site you agree to allow us to use cookies, in accordance with our Terms & Conditions.Agree & Close