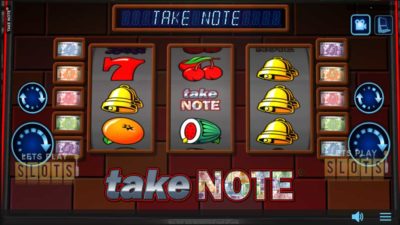 Slot games have been around for a long time. They started out as simple gaming machines in bars and clubs and have now become money-making machines for casinos.

There are a lot of players around the world who have no idea how these classic slot machines worked. This is why a number of gaming developers release classic themed online slots from time to time.

Realistic Games is the latest developer to come out with a classic themed slot called “Take Note“. This game takes players to the slot machine and leaves them there. No incredible theme, no mysterious goal. It is just pure slot gameplay.

When players start this game up, they will see nothing more than the bare bones slot machine. The grid is the traditional three rows and three reels. The only difference is that instead of one payline, there are five. The game makes up for it with an RTP of 96.15 percent.

Players can wager from $0.05 to $200. This is a good range since it allows for really low bets for those players who do not want to spend big but also allows high rollers to bet big. The maximum payout for the game is at $200,000 which is another reason why high rollers will like to spin the reels on this game.

The game has seven symbols. They are all from the old fruit slot games. You will see oranges, cherries, grapes, lemons and watermelons. There is also the Lucky 7 and a bell to give it that classic slot machine feel. The lowest value symbol is the cherry, which only gives back 1x the player’s stake. The most valuable is the Lucky 7, which awards 1000x on a successful score.

The game is pretty much a traditional slot game. This means that it mainly depends on the excitement caused by the spinning reels. But the developers know that they needed a little more to entice the modern day slot player so they threw in a bonus game.

The Scatter symbol is the Take Note logo. Players need to score it to go into the bonus mode. The game then shifts to a grid of notes. This is where the Take Note name comes from. Players are then given five chances to click and find banknotes. Each banknote has a particular value. When the five chances are done, the game checks what is the highest value banknote and then gives that as a reward to the player.

Overall, Take Note is a nice little throwback for those who want to play traditional slot games.

Hurray! There is a competition going between users of our site!
You have to do nothing, but browse out site, and win a daily prize. Click here to read more.
You current ranking:
Time Left: 14h 0m 15s
Gambling is for 18+ though some countries may have other restrictions...Remember you should always Gamble Responsibly
We use cookies to ensure that we give you the best experience on our website. If you continue to use this site you agree to allow us to use cookies, in accordance with our Terms & Conditions.Agree & Close