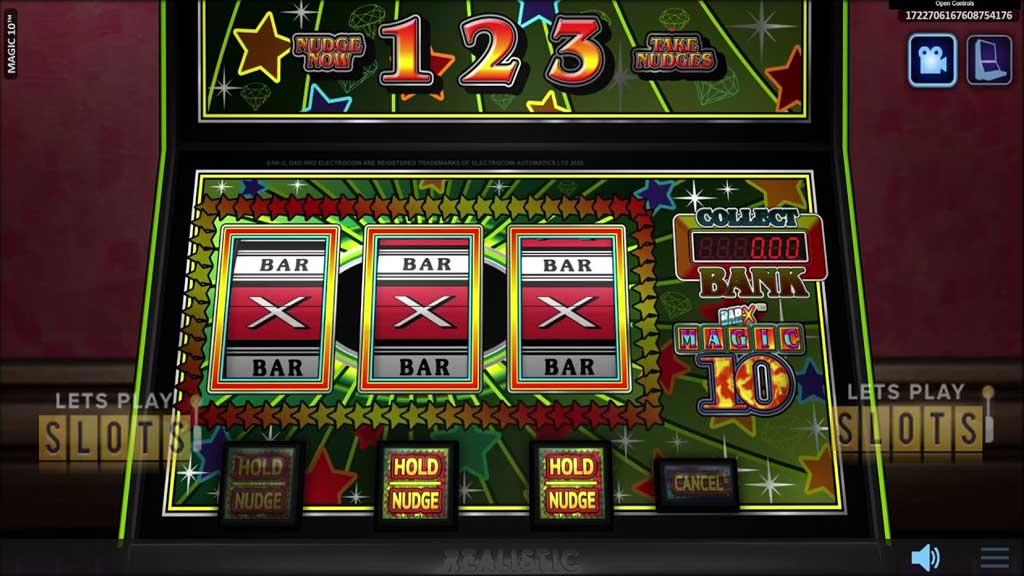 Land based casino operators make the bulk of their revenues from slot machine games. These one arm bandits generate more than 50 percent of gross gaming revenue for brick and mortar casinos. Online casinos also derive a major portion of their revenue from online slot games.

Realistic Games has come out with a new online slot that models itself on a land based slot machine game. The new slot is called “Magic 10” and is a follow-up to the pop gaming hit “Magic 7“.

When you launch this game, you are presented with a virtual representation of the slot machine as it is on the casino floor. Players have the choice of either seeing the entire machine or zooming in on the reels. Players are then shown the reels. This game is a traditional slot and has three reels and one payline. That seems a bit sparse but the game makes up for it with an RTP of 96 percent.

The game is very generous with its wager limits. Players can bet from $0.05 to $200. The low minimum bet allows new slot players to spin the reels and have some fun. The high maximum bet allows high rollers to have a few spins and test out their luck.

While it seems that the game has nothing to offer other than the basics, players also have the chance to activate special features. This is what makes the game high in variance and provides surprise wins.

Players can also get free spins when they get a win. Random chance offers them up to nine free spins.

Finally, players can get the Hold Pair feature. Players who get two symbols matched can hold the pair and spin the last reel to hope for a win.

All the special features make Magic 10 interesting. Do give it a few spins when it arrives at your online casino.

Hurray! There is a competition going between users of our site!
You have to do nothing, but browse out site, and win a daily prize. Click here to read more.
You current ranking:
Time Left: 8h 2m 9s