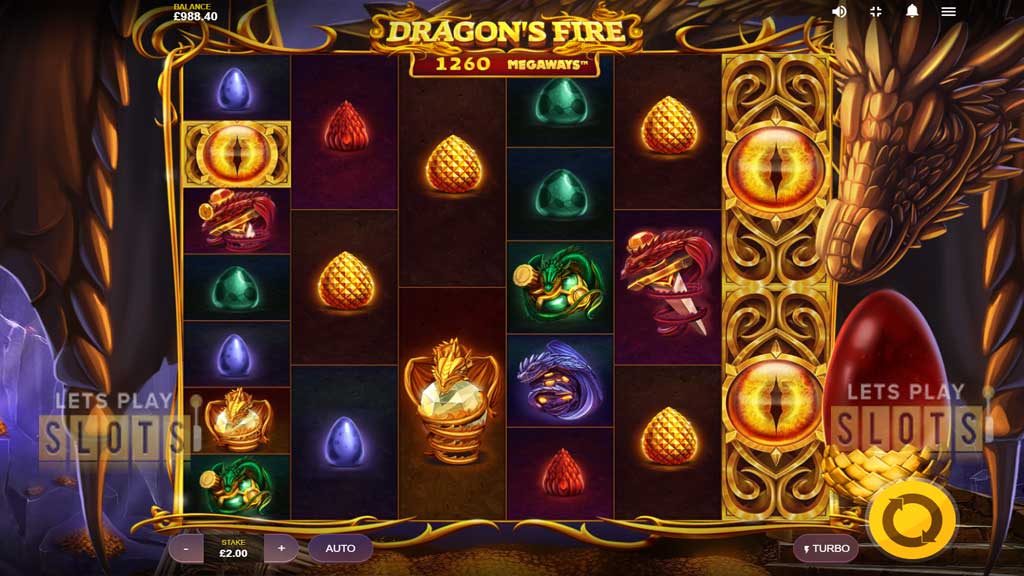 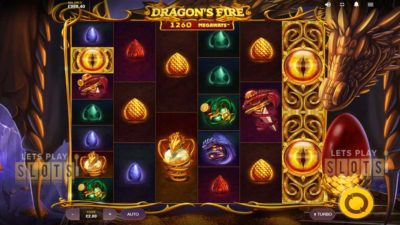 Dragons take on the role of the evil enemy in a lot of fantasy novels.

Red Tiger Gaming hopes to bring another draconic menace to life in their latest slot game called: “Dragon’s Fire: MegaWays“. The original Dragon’s Fire was a basic slot game but this one has been upgraded to the MegaWays version so it will be sure to give players a new experience.

Players will start off the game by entering a large chamber filled with gold and a mighty dragon in the background. The game has six reels and the possibility of having up to 117,649 paylines like all MegaWays games.

The goal of the game is to get sets of specific symbols in a winning combination.

If players can get at least two of the same symbol, they will be in the money. To get the most out of their stake, players will want to get a set of six symbols. The game features a set of four dragon’s eggs and four dragon gemstones as its main symbols. The most profitable symbol though is the dragon’s eye. Players who score six of it on a payline will get 50 times their stake. Players can also hope to get a wild symbol to complete their winning combination.

The fun thing about Dragon’s Fire is the various additional features. One of the game’s more prominent features is that the number of symbols on each reel varies. This is thanks to the MegaWays engine. Players can have between two to seven symbols displayed on each reel. If all reels hit their seven symbols, then all 117,649 paylines will be active.

The game has a scatter symbol and it can trigger the free spins feature when players get at least three or more of them. The amount of free spins depends on how many scatters a player scores. During the free spins, all the features will be active and players can get more free spins.

This is a fun game that gives players the opportunity to win big. Do give it a spin when you get the chance!

Hurray! There is a competition going between users of our site!
You have to do nothing, but browse out site, and win a daily prize. Click here to read more.
You current ranking:
Time Left: 11h 28m 3s
Gambling is for 18+ though some countries may have other restrictions...Remember you should always Gamble Responsibly
We use cookies to ensure that we give you the best experience on our website. If you continue to use this site you agree to allow us to use cookies, in accordance with our Terms & Conditions.Agree & Close