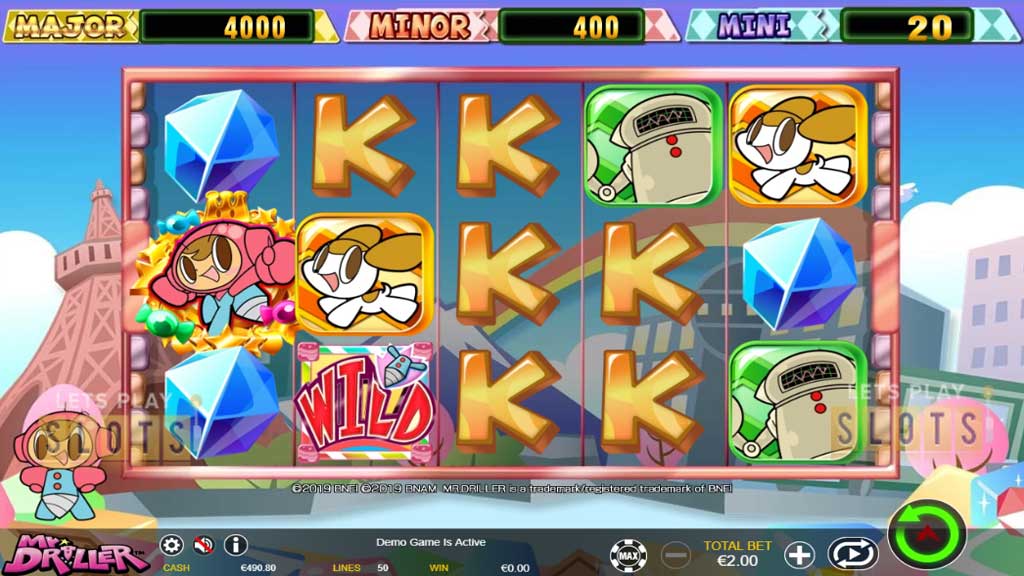 Players who are fans of retro gaming should like the latest slot release from Ainsworth Gaming. Mr. Driller was a popular gaming franchise back in the 1990s. Originally made by Namco, this game was a puzzle series that had players digging through colored blocks to get to the bottom. It was a pretty popular franchise back in the day and now it is back in slot game form.

The theme is rather obscure for those who are not fans of old video games but it works. When players launch this game, the entire playing field is notably all done in the colorful style of the Mr. Driller franchise. The game itself is very faithful to the original, with only the addition of playing card symbols as the departure from the theme.

The game is very basic and easy to play. It has five reels and 50 paylines which should give players are decent return. Players can set their betting levels from two coins per spin to ten coins. The biggest win in the basic game is around 150 times the player’s stake. That is good enough since the game allows for multiple wins and it should be easy to score one.

Players who want to win big will have to go with the various special features that the game has. This is mostly done by triggering the bonuses, which is by scoring Mr. Driller himself. When players score three of him, they have a chance to get one of four special features. A roulette wheel will appear and have four special bonuses available. Besides that, there are three jackpot prizes mixed in with them.

First, there is the Robo Multiplier, which will make your future wins bigger. There is also the Extra Chance bonus, which lets you spin the roulette wheel for another bonus. This can be big since there are three jackpots up there waiting to be won.

Break the Block is another special feature that throws back to the original game. Players will have to drill through some blocks to get a surprise prize. Finally, the Instant Win feature essentially gives players an immediate cash prize without jumping through any hoops.

The game’s biggest prizes are the jackpots being offered on the roulette. Unfortunately, they are not progressive jackpots so they are not as big as most players would like them to be. It is still a fun game though and worth a few spins just for the nostalgia!

Hurray! There is a competition going between users of our site!
You have to do nothing, but browse out site, and win a daily prize. Click here to read more.
You current ranking:
Time Left: 19h 33m 17s