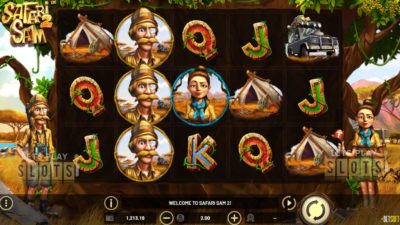 Betsoft has had a lot of success with its “Safari Sam” slot which came out in 2012. The theme of this game focused on a hunting couple named Sam and Pam who are on a trip through the African Savannah. Sam is the explorer while Pam acts as his faithful assistant.

Betsoft decided that it was time to bring back the couple to the African Savannah. Players who enjoyed the Safari Sam will now be able to play the sequel “Safari Sam 2“.

The center of all the action takes place in the middle of the screen, with Sam and Pam by the side of the grid. Players are presented with the usual five reels and three rows but the difference is that this game has 50 paylines.

The game has some great cartoonish styled visuals and it is very evident when it comes to the symbols that the game uses.

The low level of the paytable are the card royals. Then there are the more thematic symbols which are the higher paying symbols. They include a tent, a vehicle, a lion, a zebra and the two explorers. Sam and Pam are the most valuable of the symbols. Sam has a 10x reward if players get five on a payline. The game also has two special symbols. One is the Acacia which is the Scatter symbol and the compass is the Wild symbol.

Players would have to make a bet before every spin. The game offers a good betting range which starts from $0.20 and goes up to a maximum of $100. The max payout that you can win in this game is 550x.

Safari Sam 2 makes the game special with the various special features. First, the Wild is there to make winning a lot easier since it substitutes for all non-Scatter symbols. Besides that, the game retains its original Avalanche feature. All winning symbols are removed and new symbols replace them. This can mean more winning combinations in the future.

Hurray! There is a competition going between users of our site!
You have to do nothing, but browse out site, and win a daily prize. Click here to read more.
You current ranking:
Time Left: 17h 51m 13s