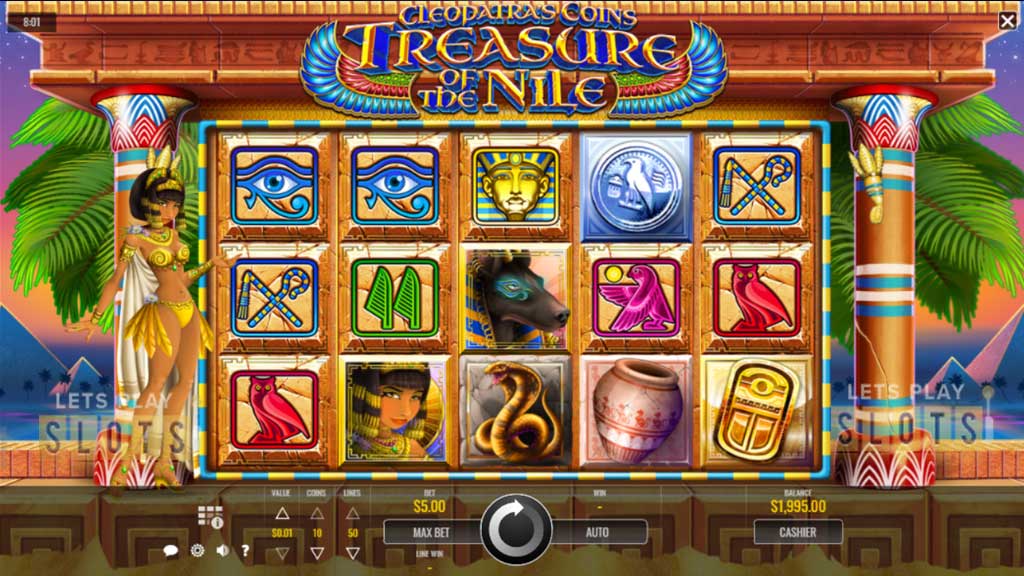 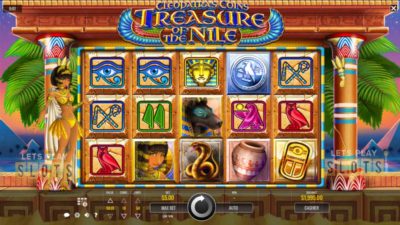 When it comes to making Egyptian slot theme games, Cleopatra takes center stage as most slot game developers tend to use the Egyptian queen.

Rival Gaming had a hit when they made their Egyptian-themed game called “Cleopatra’s Coins“. The game maker has decided that this is the right time for a sequel and has come out with a new release game called “Treasure of the Nile“.

Players are welcomed into Cleopatra’s palace for this game. The pillar of her palace frames the grid, with the lovely queen herself standing by the reels. The middle eastern music sets the mood for the game.

Treasure of the Nile is played on a 5×3 grid with 50 paylines. The game has 13 symbols, all of them Egyptian. No card symbols in the mix to break the theme. Players can get 600 times their wager if they score the most valuable symbol.

Players can make a minimum bet which is just a cent. That is a pretty low bar for wagering and should allow everyone who is interested to try out this game and place a load of spins. Players who have money to burn, the can wager up to $125. Besides that, players will also be able to choose how many paylines they can bet on. The minimum is one and it goes all the way up to 50.

Players will also like the features that revolve around the Scarab Beetle symbol. First, the Scarab Beetle acts as the game’s wild. This makes it easier to win. Additionally, it is not just any ordinary wild. It is a sticky wild. If players get a winning combination with it, then they will be able to trigger a respin and the wild stays in plays.

This is not the end of it as players can keep on getting winning combinations with the sticky wild. It will be even better if players get another Scarab Beetle. Players will be able to keep on spinning as long as they are getting scarabs and there are spots for one to land.

Rival Gaming has done a good job with Cleopatra’s Coins: Treasure of the Nile and it is a worthy successor to the original. The Egyptian theme is popular enough that players will want to try it out even if the game is a bit short on special features!

Hurray! There is a competition going between users of our site!
You have to do nothing, but browse out site, and win a daily prize. Click here to read more.
You current ranking:
Time Left: 6h 16m 39s