Prepare For A Egyptian Treasure Seeking Adventure With “Golden Glyph”

Prepare For A Egyptian Treasure Seeking Adventure With “Golden Glyph” 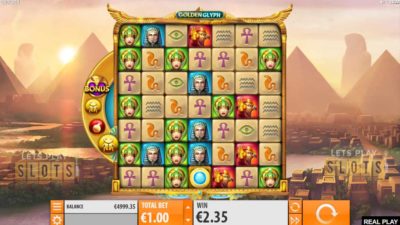 Ancient Egypt is a favourite theme of slot game makers. This time around, Quickspin takes players to the land of mummies and pharaohs for a treasure-seeking adventure in the “Golden Glyph” slot.

Players will be looking for the mysterious glyph of gold. The game delivers with great graphics and music to match it.

Players will be able to play on a seven by seven grid. The game is set in the sky above the clouds and present players with a chance to score various hieroglyphs. The real prize though is to get one of the special characters: Cleopatra, Tutankhamen and Horus.

Horus is the most valuable of the bunch and can reward players 250 times their stake provided they get 15 of him in a cluster. This is because the game uses the cluster pay mechanic. Instead of a straight payline, players needs to five or more symbols in a cluster. Players can also hope to get a W symbol, which acts as the wild.

The game also has some great special features. There is the Tumble Mechanics feature. All wining clusters disappear when they win and new symbols drop down. This can give a chance for new winning combinations and players can keep on winning as long as new clusters are formed. The game also has the Power Wild feature which combines with the Tumble Mechanics. The game adds a Wild every time a player wins so there is a better chance for a win.

Besides that, an extra Power-Up activates when the Power Wild is removed. There are several potential Power-Ups. This includes the Golden Scarab Power-Up, which spread wilds. Next, the Eye of Horus Power-Up, which removes all low-value symbols. Then there is the Blaze of Fire Power-Up, which burns away all the normal symbols that are in its way.

Finally, players can trigger the Free Spins Bonus Power-Up. Players get nine free spins and get three more during the run. Players will also get the special Golden Glyph wild. This wild moves to a random position and gives a multiplier that increases every time it is part of win. This is the main way in which players can get potentially huge payouts. Players who are really lucky will get it to a 99x bonus.

Overall, this game provides a lot of fun and entertainment to players. Do check it out when it arrives at your favourite legal casino.

Hurray! There is a competition going between users of our site!
You have to do nothing, but browse out site, and win a daily prize. Click here to read more.
You current ranking:
Time Left: 20h 10m 20s