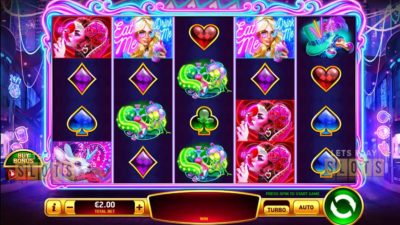 Alice in Wonderland is one of those classic stories that have been read around the world and has inspired generations.

RubyPlay is releasing a slot game that looks at this story from a different angle as the developer decided to give it a sci-fi twist. “Alice In The Wild” takes players to a futuristic city where Alice gets lost in the streets.

Players will be taken to neon streets in the future as soon as they start this game. The grid will be prominently in the middle of the screen so there won’t be anything to distract the players. The game has five reels and four rows for people to play with. The larger than normal grid accommodates around 50 paylines.

The game has a good betting range. Starting with a low €0.20, players can go all the way up to €30.00 per spin. That is good enough considering that they will get an RTP of 96.42 percent. With its medium variance, players can win up to 1,600x per spin.

The symbols for the game have a decent spread. Players will have the card suits as the low-value symbols. If players want to score higher, they will need to get one of the thematic symbols. This includes the Queen of Hearts, the White Rabbit, Green Caterpillar, the Mad Hatter, Pelican and Alice. Alice is the most rewarding symbol of the set.

Players will also want the Cheshire Cat to appear. The game has it as the wild symbol and it helps players win. It can also provide bonuses like multipliers and cash prizes. Unlike normal Wilds, they don’t disappear. Players will see them move one row upward until they disappear from the grid.

There is also a second Cheshire Cat symbol but this one activates the game’s special feature. This happens when the Cheshire Wild matches with the other Cheshire Cat. The result is explosive as all the symbols around the two suddenly become Wild. If the Wild had any bonuses attached to it, then all the new Wilds will share it. Free Spins will be given out and the Wilds will dominate the grid. This makes it an incredibly great time for players as they have increased chances of winning.

Players can also skip waiting for the matching up to get free spins. Players can click on the Buy feature and they can get the bonus for a larger spin.

If you like reading Alice in Wonderland, you should try out this futurist twist in Alice in the Wild and give it a few spins.

Hurray! There is a competition going between users of our site!
You have to do nothing, but browse out site, and win a daily prize. Click here to read more.
You current ranking:
Time Left: 19h 22m 26s