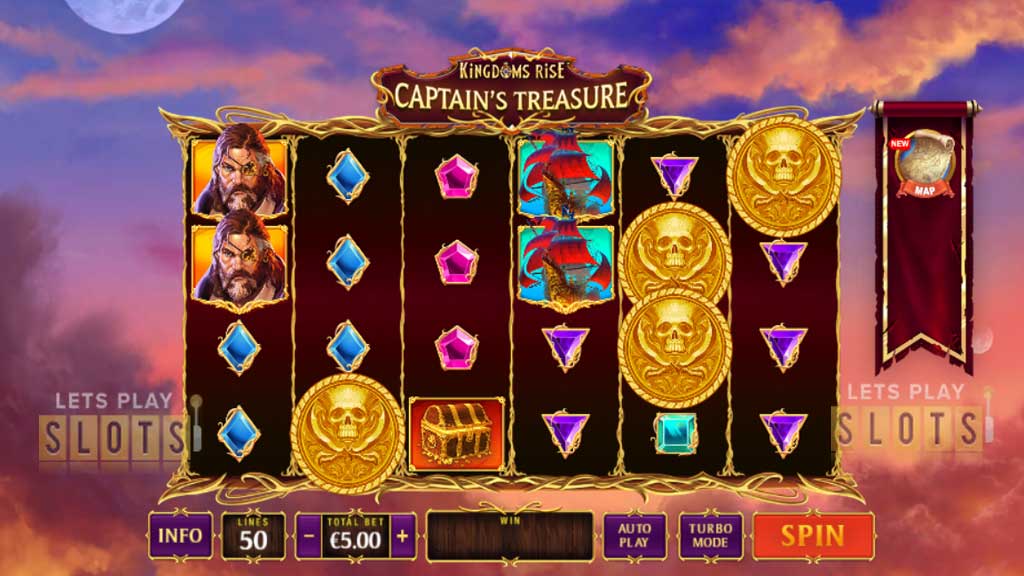 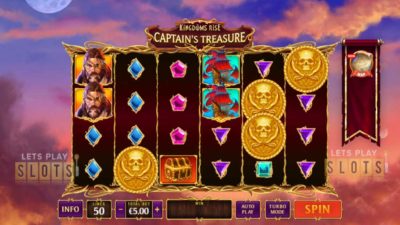 Playtech has been very successful with their Kingdoms Rise series. This slot game series features various settings inside a fantasy world and it has allowed Playtech to get fancy when it comes to graphics and music. One of their latest in the series is the “Captain’s Treasure” slot game. Players are on the hunt for hidden treasure and this game delivers on that theme very well.

Kingdoms Rise: Captain’s Treasure takes players out to sea, with a red sky in the background. The pirate theme is great but the game mixes its fantasy setting into the game. Featuring six reels and 50 paylines, this game does give players a pretty good chance of winning. This is why it has an RTP of 96.05 percent.

Two sets of symbols will be showing up in this game. Players have a chance at some low-value scores with four gemstones. The high-value results come from the fancier symbols. This includes rum barrels, ship anchors, maps, treasure chests and the pirate captain. The captain will give players five times their stake if there are six of him on a winning combination.

There is also a wild symbol in the form of a gold doubloon. Players can use it to replace all other symbols. It also gives out the highest reward with players getting 20 times their stake when they score six wilds.

The real draw of the game though is the special features. One of them is the Captain’s Treasure Respins. The game has a special wild symbol in the form of the golden compass and it acts as the gold doubloon wild. When it shows up though, players will get a respin. During these respins, the compass will leave a trail of wild symbols.

Additionally, the game can allow players to buy from the Kingdoms Rise shop. During the game, players collect tokens. These can then be used at the shop. The shop can give players access to bonuses from other Kingdoms Rise games. Players can also buy Golden Wild Respins, with prices ranging from 500 to 1,500 tokens.

The game is also part of the Kingdoms Rise network. This means it is part of the progressive jackpot rewards network. Players have a chance to win a big win thanks to that. Overall, this game is a fun one and players will enjoy the series. Players should give it a spin to get a feel for the Kingdom series.

Hurray! There is a competition going between users of our site!
You have to do nothing, but browse out site, and win a daily prize. Click here to read more.
You current ranking:
Time Left: 3h 22m 4s