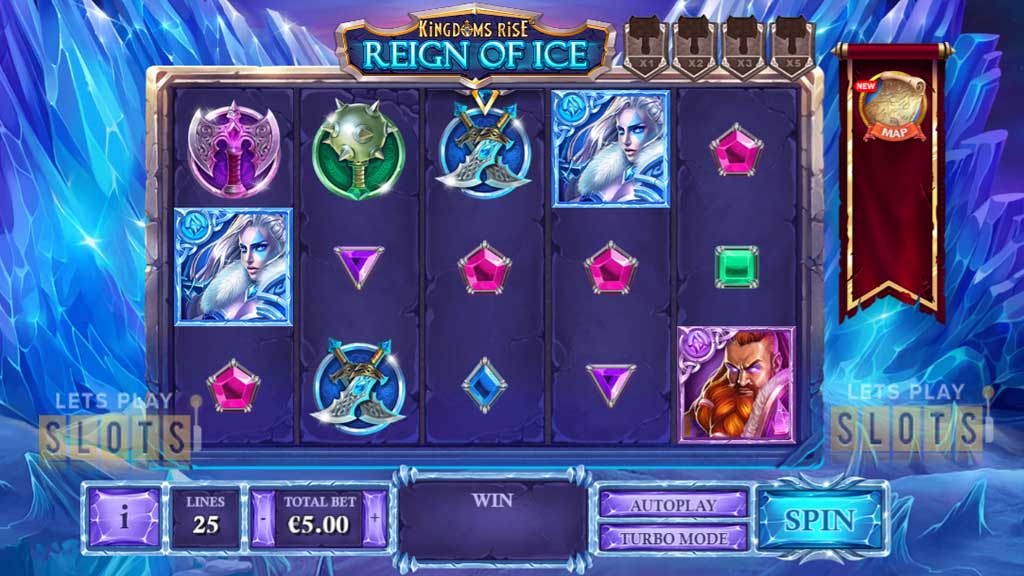 The Latest Kingdoms Rise Slot Brings A “Reign of Ice” 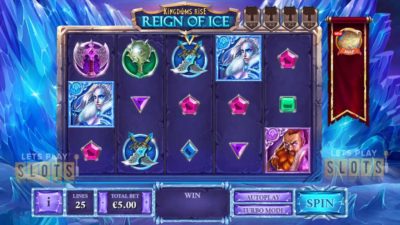 Playtech has found a winning formula when it comes to its Kingdoms Rise slot game series.

The latest game in the Kingdom Rise series is called ‘Reign of Ice’. This time around, players are going to the Ice kingdoms in the north where they will attempt to win jackpots along with experiencing some very special features.

The theme of this game comes through very quickly to those who have played Kingdom Rise games before.

This new slot continues the grand tradition of the Kingdoms Rise series of showing off some pretty lush graphics combined with a stirring soundtrack. For this go-around, players will be taken to the Ice Kingdom and the wall of ice stands behind the reels. This game has five reels and 25 paylines.

There are two wild symbols. The normal wild is the blue crystal while the Hammer Wild is the fancier version and can activate the game’s special features.

The Hammer Wild only appears on reel two and if it is scored with either Ice Barbarians or Ice Valkyries, something special happens. It adds another Hammer Wild to the available symbols with up to four of them appearing. With each hammer added, multipliers are added to the wins. Besides that, players will get a respin.

When this happens, additional reels will receive more wild symbols. When they appear, they will stick in place for the rest of the game. If another Hammer Wild appears, all wilds will unfreeze and a bonus will be awarded depending on the multiplier level.

If players don’t want to take a chance and mess with lady luck, they can decide to go directly to the Kingdoms Rise Shop. Here players can buy increased win multipliers and respins, either with more Ice Barbarians or Ice Valkyries. All of this is aimed at scoring one of the three big jackpots in the Kingdoms Rise network.

Overall, this is a fun addition to the successful Kingdoms Rise series and players must give it a spin.

Hurray! There is a competition going between users of our site!
You have to do nothing, but browse out site, and win a daily prize. Click here to read more.
You current ranking:
Time Left: 5h 37m 59s
Gambling is for 18+ though some countries may have other restrictions...Remember you should always Gamble Responsibly
We use cookies to ensure that we give you the best experience on our website. If you continue to use this site you agree to allow us to use cookies, in accordance with our Terms & Conditions.Agree & Close