Sail Through The A Viking Storm With “Thunder Shields” 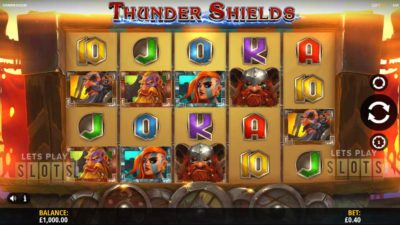 The Vikings were some of the world’s best-known warriors. Their bravery has been retold over the years through numerous stories, films and games. iSoftBet has come out with a new Viking themed game titled “Thunder Shields“.

When players open this game, they will be whisked away to a stormy sea and massive lightning in the background. This game really sells the setting and players will love the graphics and musical effects.

Players will be presented with five reels and four rows in Thunder Shields. There are 40 fixed paylines for players to win on. Unfortunately, the betting range for this game starts from $0.40 and goes up to $40.

This betting range is more suited for mid-stakes players who will be pretty okay with the RTP of 96 percent. The current maximum jackpot for the game is set at $250 for the base game.

The game itself has an interesting set of symbols to play with. There are the card royals done in runic style which are the lowest-value symbols. The next level of symbols are four different characters. These are all premium symbols and payout 6.25x the player’s stake when five of a kind is scored.

Players will enjoy the Colossal Respins feature which happen when a wild symbol drops down. The result is that the first two reels will have a chance to drop giant symbols that occupy multiple spots. Players will also be given a chance to get a respin. As long as a wild appears, the respins will continue. It will either end with no more wilds appearing or if all reels are full of Giant symbols.

You also have the Mystery symbols which are great icons since multiple stacks of them appear. When they trigger, they all turn into the same symbol and can ensure a big win. Finally, the Cash Shields trigger the Hold and Win game. When six of them appear, players enter a bonus game where they have three spins. They will try to fill up the reels with as many shields as possible. This will determine how much they win as well as their jackpot level.

There is the Mini jackpot which only gives a 10x multiplier, the Major has 100x, and the Mega Jackpot has 1,000x multiplier.

Overall, Thunder Shields is a pretty cool slot to play!

Hurray! There is a competition going between users of our site!
You have to do nothing, but browse out site, and win a daily prize. Click here to read more.
You current ranking:
Time Left: 13h 29m 12s
Gambling is for 18+ though some countries may have other restrictions...Remember you should always Gamble Responsibly
We use cookies to ensure that we give you the best experience on our website. If you continue to use this site you agree to allow us to use cookies, in accordance with our Terms & Conditions.Agree & Close