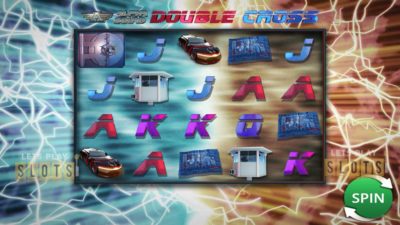 Saucify is bringing to life an exciting racing heist themed adventure in which two heroes, Ivana and Thadius try to steal treasures from a vault and escape in “Alpha Squad: Double Cross“.

The developers have done a good job with the graphics and players can expect some high-octane fun. The background music will also get your adrenalin pumping.

When players start this game up, they get to immediately see the five reels and three rows. The game has 30 fixed paylines for players to win on.

That is a pretty good spread for players to try and get a win. The game has an RTP of 95.96 percent which allows for an average rate of wins.

Players can wager from $0.01 up to $15. This is very low and might not encourage high rollers to play. But the low limits can help attract new slot players and those who don’t have a small bankroll. Low bets do mean that the game cannot offer big prizes compared to other modern slot games in the market.

There is also the usual spread of symbols. Players will encounter the card royals as low-value icons. Players can then move on to the premium icons which include maps, security houses, vaults, hybrid cars, and gold bars. The most valuable of the bunch is the gold bars. Players can score a maximum cash jackpot of $150 during regular spins.

The game has three special symbols. They include Ivan and Thadius as the Wilds and the Double Cross logo as the scatter symbol. The Wilds can replace any of the regular symbols. They can appear at the same time and mix and match.

Players can also score the scatter symbol to get free spins. Players who land three scatters will get five free spins. That may not seem like much but the game converts the entire third reel into a Wild reel. That means all of the symbols are wild. With 30 paylines, players will have a good chance of scoring a winning combination with its presence.

During these free spins, players can get a maximum of 456x their value on their bet. That’s a big bonus for any game and makes up for the low wins in the basic game. Overall, Alpha Squad Double Cross offers players an exciting experience and is definitely worth a few spins as players hope to hit the jackpot.

Hurray! There is a competition going between users of our site!
You have to do nothing, but browse out site, and win a daily prize. Click here to read more.
You current ranking:
Time Left: 7h 50m 6s