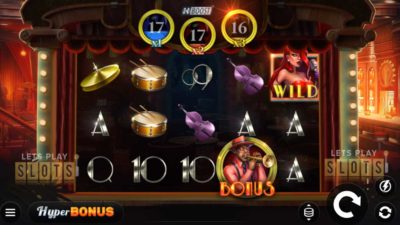 There was a time in US history when drinking alcohol was against the law. This was referred to as the prohibition era.

If someone wanted a drink in those days, they had to go to hidden establishments that sold illegal alcohol.

These were called “speakeasies” and Kalamba Games is bringing them back to life in their latest slot aptly titled “Speakeasy Boost“.

In this game, players are taken to a hidden club where they get to see a sexy singer belt out some jazz tunes while they are served with some prime alcohol. The game’s grid occupies the entire screen.

Players are presented with a grid of five reels and three rows. The transparent reels allow players to see the background but the presentation is still fine. There are 243 ways to win on this grid.

The game has a very distinct visual style that carries over to its symbols which are beautifully presented. The low-value card royals are done in an art deco style while the more valuable theme symbols are eye catching. They include a piano, drums, a cello, cymbals, a saxophone and a microphone. The last two are the most valuable with a maximum of 100x, when scored with the maximum amount of symbols.

Betting is set in the medium range. Players can wager from $0.50 and then go all the way up to $50. The high minimum betting range and the low maximum betting range makes this game appealing for mostly mid-stakes players. However, both low stakes and high stakes players will want to give this game a few spins because it can give you a big payout considering the game has a maximum jackpot of 52520x. The high RTP of 97.49 percent also makes Speakeasy Boost very attractive.

The game has several special features that make it a lot more fun than the ordinary slot game. These are made possible by the presence of special symbols. The red-haired singer is the Wild, while three band members are the game’s bonus symbols. The game also has an interesting feature where all the regular symbols can land as split symbols. This means you can be double or triple symbols.

Players should take note of the indicators on top of the reels when they play. These represent the chance of a bonus round and can give players up to 25 free spins. These fill up by scoring the three bonus symbols. Depending on which meter fills up, players can get multipliers. If the Wild lands, there are also multipliers to any wins scored. Players can also land the scatter symbol to get up to 10 free spins.

Overall, Speakeasy Boost from Kalamba Games is very volatile and profitable which should appeal to a lot of slot players.

Hurray! There is a competition going between users of our site!
You have to do nothing, but browse out site, and win a daily prize. Click here to read more.
You current ranking:
Time Left: 1h 35m 28s