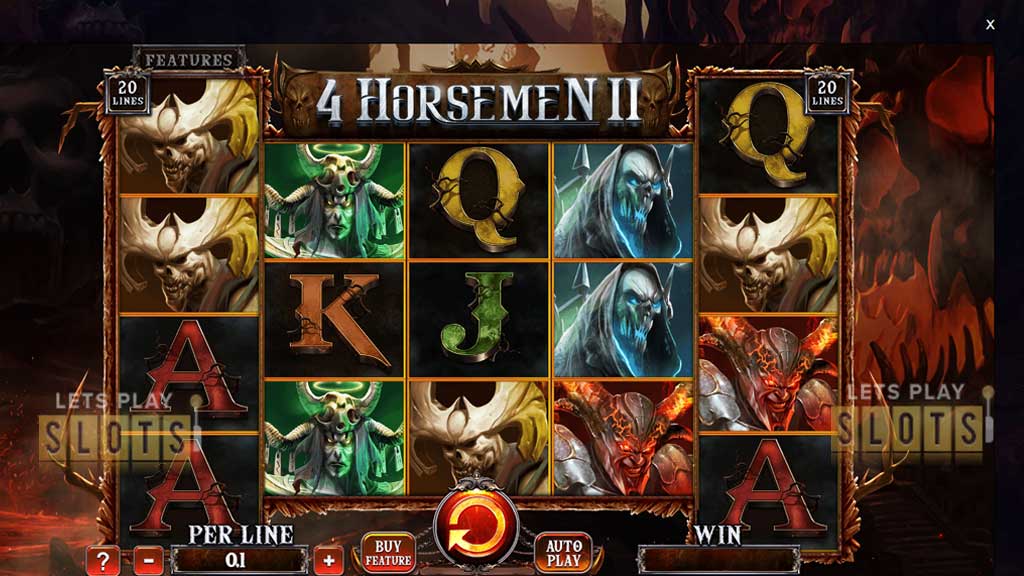 Spinomenal Takes You To The Apocalypse With “4 Horsemen II” 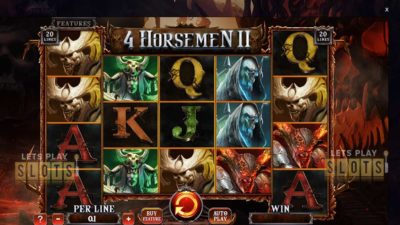 Spinomenal is once again set to take players to an end of the world scenario. The slot developer decided to go back to one of its smash hits with the release of a sequel. Players should be ready to rock with “4 Horsemen II“. This is a game that is aimed at high-speed entertainment and will keep players busy from start to finish.

Players will be taken into the middle of hell when they start this game up. There will be smoke and ashes everywhere. There are also some really big skulls to add to the creep factor. Players will be confronted with an animated and the sound effects will reflect the theme of this game.

4 Horsemen II uses a non-standard grid. There are five reels, but the three middle ones only have three rows. The two reels on the edges have four rows. The standard rules of winning are in place, with three symbols being needed. The difference is that players can use both sides of the screen. There are a total of 20 fixed paylines.

The betting range for the game starts from 20 cents and goes all the way to 200 euros. This slot currently has an RTP of around 96.3 percent.

The game has an impressive set of thematic symbols. They are the Four Horsemen of the Apocalypse and they are visually striking which is credit to the designers and the great job they have done.

This slot has a number of special features which only adds to the excitement. One of the immediate features that players will notice is the appearance of Colossus symbols. These are super big versions of the normal game symbols. These can occupy multiple slots and make it much easier to win since they cover the entire three central reels.

Another special feature is the appearance of Mystery Symbols. Players don’t know what these symbols are, until they land. They then appear as another icon at the end of the spin. The Bonus Symbol is also another symbol to look forward to as it gives players a chance at the Spin The Wheel bonus game. Lucky players can get multipliers for future spins. Additionally, the Free Spins symbol is also there to give players free spins.

Overall, 4 Horsemen II is a fun and entertaining experience. Players should give it a try for the surprising wins and the unique gaming environment that is present within this game.

Hurray! There is a competition going between users of our site!
You have to do nothing, but browse out site, and win a daily prize. Click here to read more.
You current ranking:
Time Left: 18h 45m 24s
Gambling is for 18+ though some countries may have other restrictions...Remember you should always Gamble Responsibly
We use cookies to ensure that we give you the best experience on our website. If you continue to use this site you agree to allow us to use cookies, in accordance with our Terms & Conditions.Agree & Close