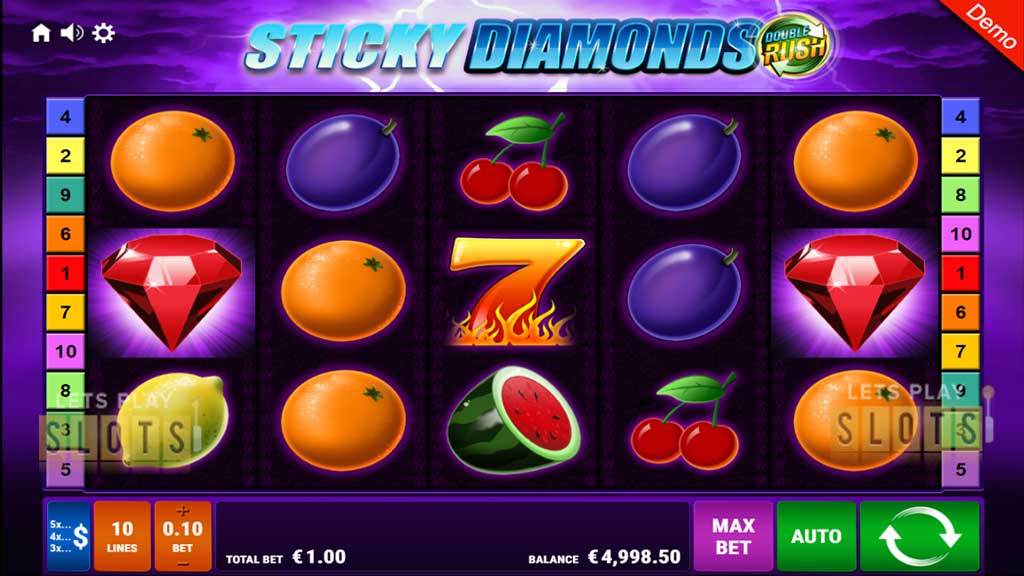 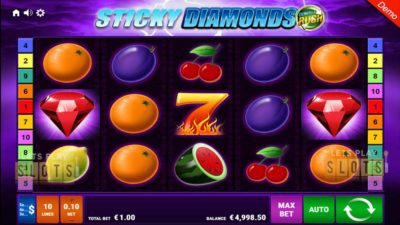 The classic fruit machines slot games still generate a lot of interest and hence it is no surprise then that many game developers are still making them. The difference is that they are adding a few twists that make it a bit more interesting for everyone involved.

Gamomat is doing just that with its new “Sticky Diamonds: Double Rush” slot game. Despite the bare-bones background, players will be able to experience a fun time with this game.

When players start this game up, they will see a simple background and a 5×3 grid. There are 10 paylines in this game which makes it easy to understand and simple to play. The RTP for this game is at 96.08 percent.

The big concern is that the game is limited in the amount players can bet. The spread starts from $0.20 per line, going only up to $1. That means that the biggest bet in the game is $10. This is nice for those who don’t have a lot to wager but high rollers who want to play with hundreds of dollars in bets won’t like it.

The game’s symbols are also a boring mix. Those familiar with fruit machines should know the various fruits: cherries, grapes, plums, oranges, watermelons and lemons. There are even the fancier silver bells and burning sevens. The most valuable symbol is the burning sevens. Players who get five of it on a payline will get 100x their stake on that line. So players can win up to $100. This is compared to the lowest symbols which rewards players 5x their stake, which is only $5.

The game does have a few special features. For one, there are two special symbols. One is a big red diamond which is the Wild symbol. The other is a round portal with lightning bolts acting as the scatter.

As the Wild, the red diamond on reels 1, 3, and 5 and does not pay on its own, but it substitutes all other symbols except the Scatter. This can result in a nice surprise win.

The scatter symbol gives players a chance to trigger the Free spins feature. Players need to score three or more scatters to get 11 free spins. Additionally, players can get a multiplier depending on how many scatters were scored. The largest amount is 50x. Besides that, Wilds will stay in place once they land during the free spins. After 11 spins, there is a chance at a randomly activating the Mystery Retrigger for another round.

Finally, there are two special features. One is the Double Rush feature. Players can make two spins with one bet. There is also the Gamble feature that allows players to go double or nothing after every win. They can either bet on a card game or a ladder game. If you like playing fruit themed slots, go ahead and give Sticky Diamonds a few spins.

Hurray! There is a competition going between users of our site!
You have to do nothing, but browse out site, and win a daily prize. Click here to read more.
You current ranking:
Time Left: 1h 41m 0s