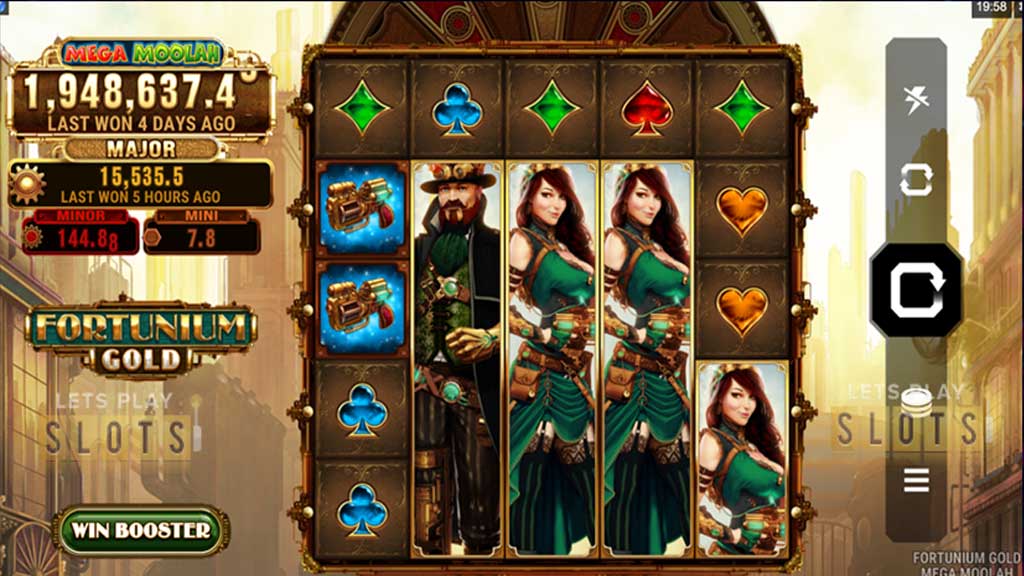 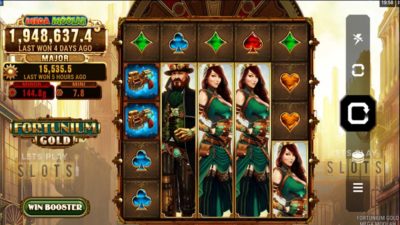 Microgaming’s Mega Moolah series of jackpots sets the standard when it comes to progressive jackpots. Players will be happy to know that there is a new addition to the popular Mega Moolah series. The latest game is an offering from Stormcraft Studios who has collaborated with Microgaming to produce “Fortunium Gold: Mega Moolah“.

Players will be taken to the city of Fortunium as soon as they launch the game. The developer has used a steampunk design which is evident from the background and characters that are involved in this game.

The game is played on a grid that has pipes and gears. It follows the 5×5 format and has 40 paylines for players to win on.

The game features a mix of symbols. There are the low-value card suits which only pay out the bare minimum. The more valuable symbols are thematic and are include the treasure chest, airship and the two adventurers. Players can expect 8x their stake if they score five of the adventurer symbols.

Players can wager from 0.10 to 15 credits per spin which is pretty low but given the number of paylines, it will give players a chance at multiple wins. The game has medium volatility so players shouldn’t expect massive wins except for when they hit the Mega Moolah Jackpots. The game has a decent RTP of 96.27 percent.

Players do not play Mega Moolah games for the basic experience. They are really in it for the extras and Fortunium does deliver on that front since there are several special features. The game has two Wild symbols. One is the basic one and the other is for the jackpot version. Both symbols can substitute for regular symbols while the scatter symbol which is a green glass sphere gives out free spins. There are also two Mystery symbols. One is green while the other is gold. They appear on reels and can change into a random symbol when they stop spinning.

Players who are looking at bigger payouts can click the Win Booster button. This will add 50 percent more of their stake to the pot and all the low-value symbols disappear. The Mega Moolah jackpot gets triggered when you get golden mystery symbols that change into jackpot wilds. When this happens, players will be able to spin the jackpot wheel and see if you come up with a mega, minor or mini jackpot!

Hurray! There is a competition going between users of our site!
You have to do nothing, but browse out site, and win a daily prize. Click here to read more.
You current ranking:
Time Left: 21h 38m 41s
Gambling is for 18+ though some countries may have other restrictions...Remember you should always Gamble Responsibly
We use cookies to ensure that we give you the best experience on our website. If you continue to use this site you agree to allow us to use cookies, in accordance with our Terms & Conditions.Agree & Close