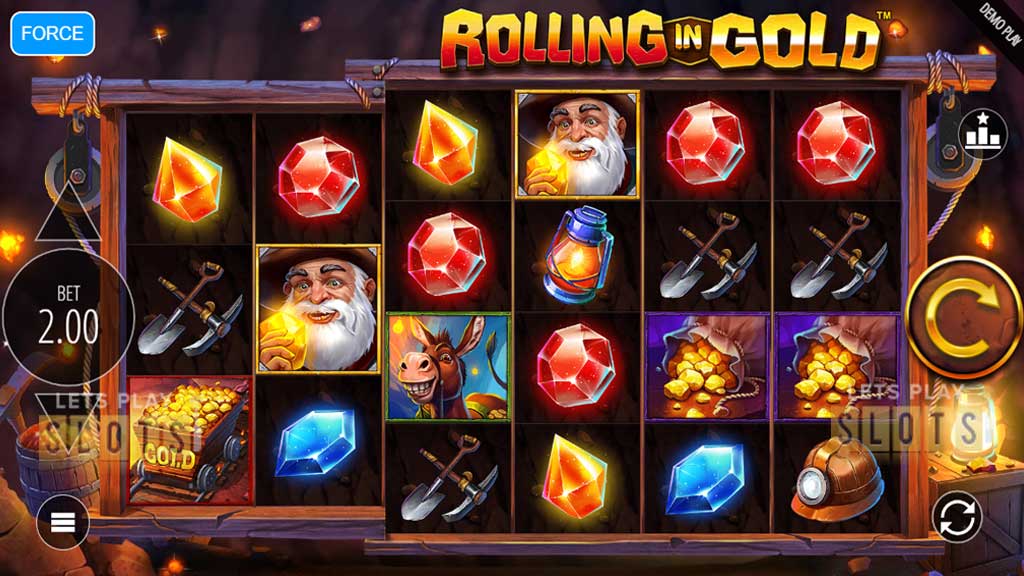 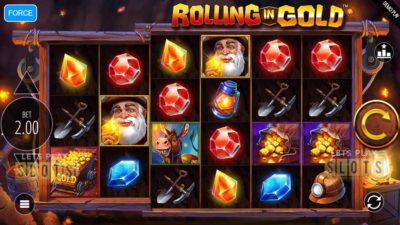 Striking it rich by stumbling on a gold mine is a dream of a lot of people. Blueprint Gaming has taken this stream of thought and turned it into a new slot game aptly titled “Rolling in Gold” takes. This new game takes players deep into a mine to give them a chance to unearth some precious gold nuggets. The setting for this game is in a gold mine and the background music keeps you engrossed.

The grid dominates the screen and it has an unusual structure. When players start this game, they will find a 3x3x4x4x4x4 grid. That is a confusing set but it works well. Thanks to the arrangement and the pay-in-all-ways rule that it uses, Rolling in Gold has 2304 pay lines. Paired with the high RTP of 96.46 percent, players will love this game.

The game’s symbols are an interesting mix. There are no card royals in this game. The basic gemstones act as low paying symbols. Players then have a variety of mining symbols. This includes tools like pickaxes and more. The most valuable symbol though is the old prospector. The game also has special symbols that will add more excitement to the gameplay.

The betting range for this game starts from $0.10 and goes up to $50. The max betting range is lower than expected and may turn high rollers off from the game. However, the lower limits can still be profitable since the biggest payout in the game is 50,000x.

Players will be hoping to trigger some of the special features in this game. First, there are occasional TNT blocks. These are mystery symbols that appear during the game. When they stop, all the blocks convert into the same symbol, which can allow for some big wins.

The dynamite symbols acts as the wild and scatter symbol. The wild symbol substitutes for most symbols but they also have another purpose. When a player lands a dynamite symbol on reels one and two, and matches it with a golden nugget symbol on reel three, they are then presented with a 4×4 grid and three respins.

Players need to land gold nuggets to help fill up the grid. Every new addition resets the spins. The game is done when it is full of players trigger the Diamond Spins bonus. This is just an enhanced version of the basic bonus game with multipliers.

If you are looking for a fun time, go ahead and give Rolling in Gold a few spins!

Hurray! There is a competition going between users of our site!
You have to do nothing, but browse out site, and win a daily prize. Click here to read more.
You current ranking:
Time Left: 21h 13m 45s