Take Pirate Adventure With “Slayer of the Seas” from Copacabana Gaming 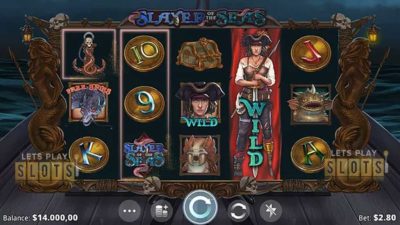 The modern world has not been exposed to the era were pirates sailed the high seas to loot and plunder wealthy merchant ships. Copacabana Gaming decided to come out with a new slot that gives players a peek into what it would be like to be on a pirate ship. This is unlike other pirate themed slots because their new “Slayer of the Seas” slot also brings the monsters of the seas into the mix.

When players start this game up, they will be greeted with a pirate ship in the middle of the ocean. The adventure takes place in the middle of the night. The dark-blue background is the setting for this new adventure for players. The ship is waiting for a storm to hit so that they fight off the monsters of the deep.

The game displays five reels and three rows. Players can wager up to 500 credits which can give them a lot of money to lose and win with. There is an interesting set of symbols for players to try and match. There are the playing card symbols which are the low-value symbols for this game. The sea creatures are the next most valuable. The star of the show is the female pirate captain who acts as the game’s Wild symbol. She will be a big help in scoring the many winning combinations available in the game.

If you want to keep the reels spinning during a break, set it to Autoplay and then Turbo mode. This means that you can leave it alone for a drink or two and it will keep spinning until it registers a win.

The game has a decent set of features for players. For one, there is the Free Spins symbol. When it shows up, players have a chance of getting some free spins. Players will need to score three or more of the symbols to activate the Free Spins. Players then get to play for free for a short while.

Besides that, the game has the Bounty’s Chest feature. Players will sometimes get a chance to randomly pick a chest. If they are lucky, they will be able to get an instant prize.

Overall, the game is pretty fun. Copacabana Gaming is better known for video bingo and scratch cards so it is nice that they are branching out. This game delivers an interesting theme combined with a decent set of features. Do give it a few spins when it shows up at your online casino.

Hurray! There is a competition going between users of our site!
You have to do nothing, but browse out site, and win a daily prize. Click here to read more.
You current ranking:
Time Left: 33m 57s