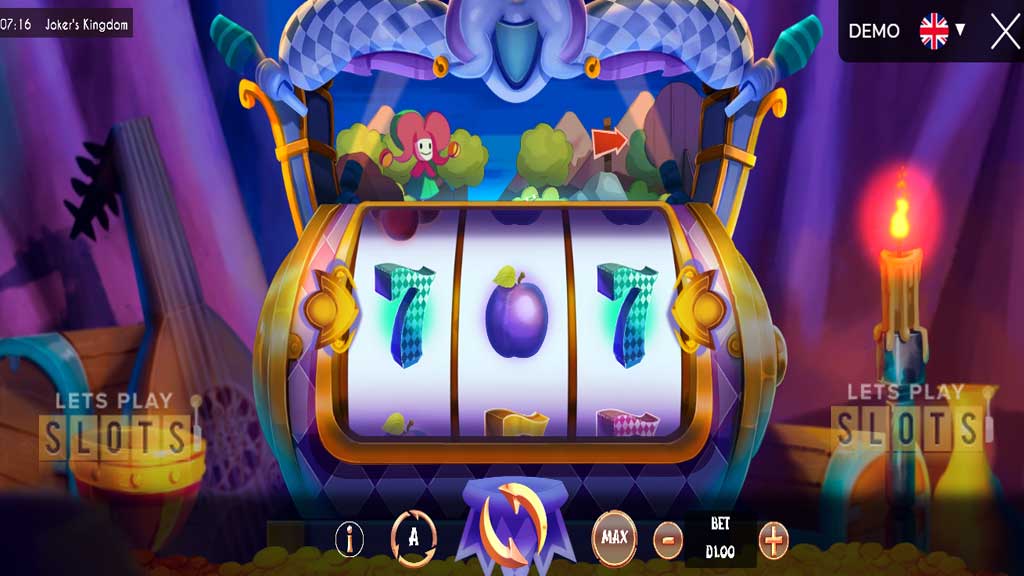 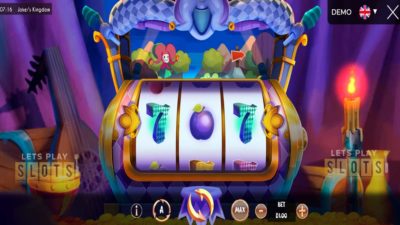 “Joker’s Kingdom” from Triple Cherry looks like a traditional slot game with its small grid but there is quite a lot of jammed packed action in this game. The theme is different as it focuses on a Joker puppet who is trying to do all he can in the kingdom to woo the Lady Joker puppet. The graphics are pretty good considering the simple theme.

This game does not have a fancy grid like most modern slots as the developers have decided to limit the game to three reels and one row. This means that the game only shows players three symbols, where it is easy to see whether they have won or not at a single glance.

Players will be able to see six different symbols all throughout the game. There are three different seven symbols and then three fruits: berries, cherries and watermelons. There is also a blue and purple Joker that acts as the wild. This should help players score a win since it can act as any other normal symbol.

Wagers run from 0.25 to 25,000 coins per spin. This is quite a wide betting range and will allow even the high rollers to have fun. With medium variance, players will get a decent return on their wager. However, the game’s RTP is at a low 95.68 percent which means there is a low win rate here given the fact that most of the popular slots have an RTP of 96 percent and above.

The biggest payout on a normal spin is 20x, which is what the gold seven gives out. Lucky players who get the Wild will be able to get 160x their total bet.

All of the above payouts take a backseat to what is happening with the Joker’s Quest. After every spin, the Joker advances on his trip through the kingdom and opens up the possibility of coming on something special that will make things a lot more profitable.

For example, if players end up finding a key, it will unlock the mini-game. Players then get to spin on a roulette wheel that gives multipliers from 1x to 100x. Another bonus is the Joker’s Hat. This locks two reels and respins the third, allowing for an easy win. Finally, the mask offers up to 10 extra spins when it turns green which occurs when enough masks are collected.

Players can also activate the Treasure mini-game. Players have a chance to open several chests and get prizes until a jack-in-the-box joker jumps out of one.

Overall, Joker’s Kingdom offers players a lot of fun and excitement despite its many limitations.

Hurray! There is a competition going between users of our site!
You have to do nothing, but browse out site, and win a daily prize. Click here to read more.
You current ranking:
Time Left: 5h 31m 50s