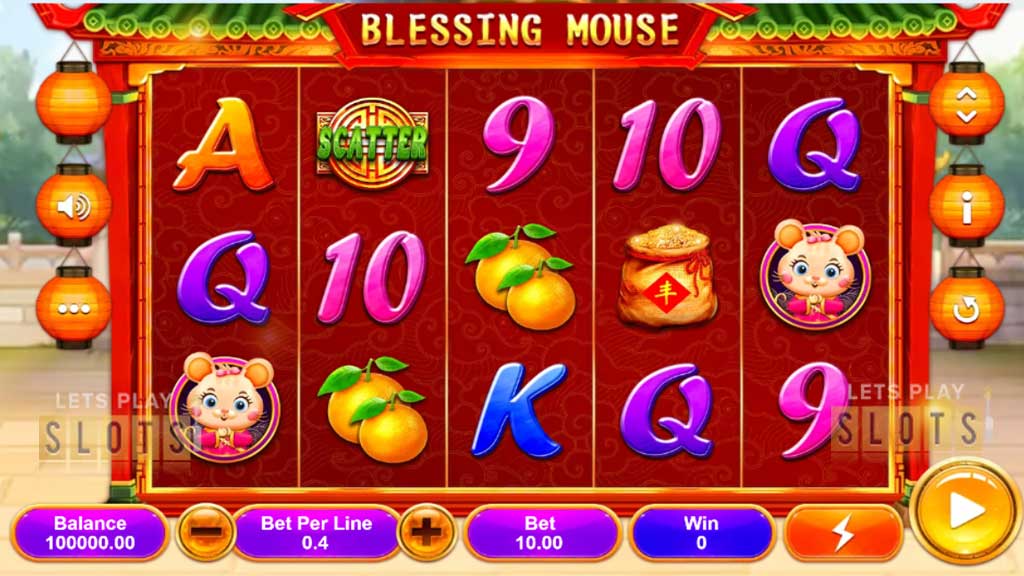 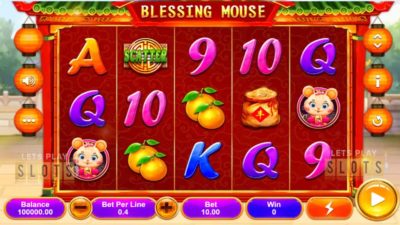 The mouse (rat) is a fascinating symbol of wealth and good fortune in China. This is why it is often seen as a blessing, at least in the Chinese Zodiac. This is where the new game from Triple PG gets its theme. Players are hoping to get a little help from the cute little mouse to claim some riches. The game is pretty basic but it does have its charm.

When players start this game, they will be taken to the courtyard of a Chinese temple and presented with the grid. The graphics are colourful and amusing while the soundtrack gets you in the mood. They look a bit simplistic but they have the general feel of the genre so they are fine.

The reels are also pretty simple. Displayed in a Chinese-themed frame, there are five reels and three rows. The game has 25 paylines which gives players a decent chance at winning. As a slot game, the goal is to get winning combinations of symbols.

There are two levels of symbols available. Players may not want to get the low-value card royal symbols but they do provide decent prizes. The real prizes though come from the more valuable character symbols. These include a bag of gold, a Chinese character, oranges and a male mouse. The male mouse is the most valuable of the bunch and can allow players to win with only two of him.

The game is pretty basic so you might want to skip most of the basic spins. You will only want to be there for the wins. This is why there is the Auto Spin Feature. Players can get the game to keep on spinning until a win happens or something special is triggered.

The game shines when you score one of the special features in the game. For one, the game has a Wild symbol. It mainly acts as a way for players to complete their winning combinations. This is because it acts like most other symbols except for the scatter. But besides making wins easier, it also doubles the prize of the win.

The game also has a scatter symbol that triggers free spins. Players can get up to 33 free spins with it, along with a 15x multiplier. Overall, Triple PG‘s Blessing Mouse is a nice little game that you can leave running with Autoplay. It is worth a spin or two for the fun of it.

Hurray! There is a competition going between users of our site!
You have to do nothing, but browse out site, and win a daily prize. Click here to read more.
You current ranking:
Time Left: 13h 29m 25s
Gambling is for 18+ though some countries may have other restrictions...Remember you should always Gamble Responsibly
We use cookies to ensure that we give you the best experience on our website. If you continue to use this site you agree to allow us to use cookies, in accordance with our Terms & Conditions.Agree & Close