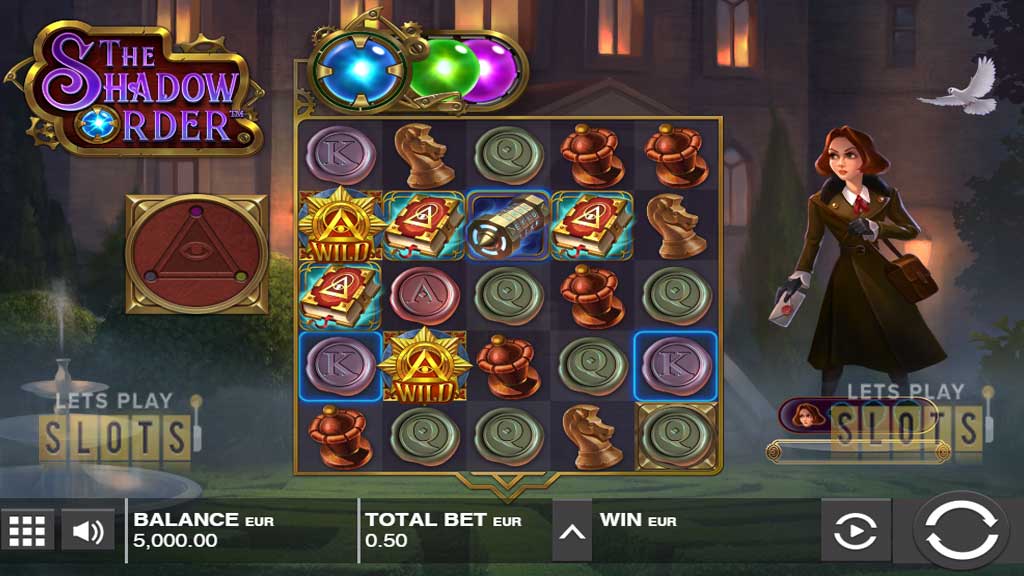 Uncover Hidden Mysteries From ‘The Shadow Order’ With Push Gaming 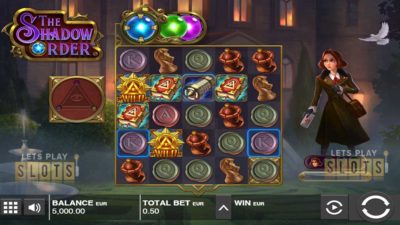 Secrets and conspiracies abound in the world of ‘The Shadow Order‘. This new game from Push Gaming takes players into a world of secret societies and hidden mysteries as players try to figure what is being kept in the dark. Unlike normal slot games, this game features a cluster pay system instead of paylines. This changes a lot of things and can give players a good chance at winning.

Players are welcomed into the game as they are taken to the front of a luxurious mansion. Clear crisp graphics sets the reels in the center while the bonus meters are to the side. Above the reels are the three special orbs that provide bonuses for the players if they get activated.

The reels themselves are a set of five rows and five reels. Players score a winning combination if they get three or more of the same symbol horizontally or vertically. There are the low value symbols that are the card symbols. High value symbols include chess pieces, coins, code breakers and books of ciphers. The most valuable symbol though is a pair of gold rings. Five of it in a combination will award 120 times the player’s stake.

A wild is also available and it can replace any of the standard symbols. If a player gets five wilds, they will get 300 times their stake. When a winning combination is scored, the symbols are removed and symbols are dropped down and a new set of winning symbols can be scored. This continues until no more winning combinations are scored.

If players keep on scoring combinations and the symbols cascade a number of times, one of the orbs will drop. They will act as wilds while on the reels but there are three places where they can land and be activated.

There are three orb types and each has a special effect. The Orb of Destruction destroys all the lower value symbols and replaces them with a new symbol. The Orb of Creation adds between three to six wilds to the reels. Finally, the Orb of Preservation holds all of the highest paying symbols on display are held.

Besides the orbs, players will have extra characters that activate when a meter is filled. This is done by landing ring symbols. There is Molly the Messenger who allows one orb to drop. Next is Billy the Gambler who convert converts lower value symbols into higher value ones. Another is Archie the Spy who adds one wild. Finally, Amarillo the Magister gives a free cascade of only high value symbols. There is also a free games feature when the three orbs reach the bottom right of the reels, giving players five free games.

Overall, this game is a fun time and should be worth a try when it is rolled out.

Hurray! There is a competition going between users of our site!
You have to do nothing, but browse out site, and win a daily prize. Click here to read more.
You current ranking:
Time Left: 1h 20m 19s