Unearth Some “Lucky Scarabs” In The Egyptian Desert 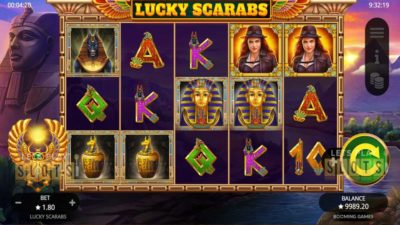 Slot developers continue to bring out new games based on Egyptian themes. The ancient Egyptian is filled with rich history, fantastic characters and hidden riches that provide the perfect plot for developers to spin their tales and bring out exciting slots. Booming Games is the latest developer to come out with a new Egyptian themed slot titled “Lucky Scarabs“.

Players will be helping out a lady explorer who is a cross between Indiana Jones and Lara Croft. They are immediately taken to the desert with the Sphinx, the river Nile and the pyramids clearly visible in the background. The background track adds to the mystery and intrigue of the game.

The grid is the standard five reels and three rows. Players will be trying to score on nine paylines. The symbols in this game are a mix. There are the card royals which are the low-value symbols for this game. The high-value symbols are the more exotic Egyptian treasures. The game is a high volatile game, which gives players the opportunity to win big.

Players will be able to wager from a min of $0.09 to a max of $450. That is a decent betting range which is suitable to both high rollers and players with a small bankroll.

The game has a nice set of features. The most important feature is the one that involves the golden scarab. This is a design that is right beside the grid. While it may seem like a decoration, it has a purpose.

During the game, the scarab might release a set of wilds in the reels. This is random so players can receive anything from two to fifteen wild symbols. These act as all other symbols which make them useful when players want to get a win.

The great thing about it is that the scarab does not just release ordinary wilds. It also has Sticky Wilds to release. Players can get one to ten of them during a spin. Sticky Wilds stay around and can allow for multiple wins instead of disappearing in just one go.

Finally, the game offers players a chance at free spins. For this to happen, they need to score three or more scatter symbols. Players then get three free rolls and a chance at triggering it again.

Overall, Lucky Scarabs is a fun little game to try out. Do give it a few spins when it shows up at your online casino.

Hurray! There is a competition going between users of our site!
You have to do nothing, but browse out site, and win a daily prize. Click here to read more.
You current ranking:
Time Left: 18h 7m 57s
Gambling is for 18+ though some countries may have other restrictions...Remember you should always Gamble Responsibly
We use cookies to ensure that we give you the best experience on our website. If you continue to use this site you agree to allow us to use cookies, in accordance with our Terms & Conditions.Agree & Close