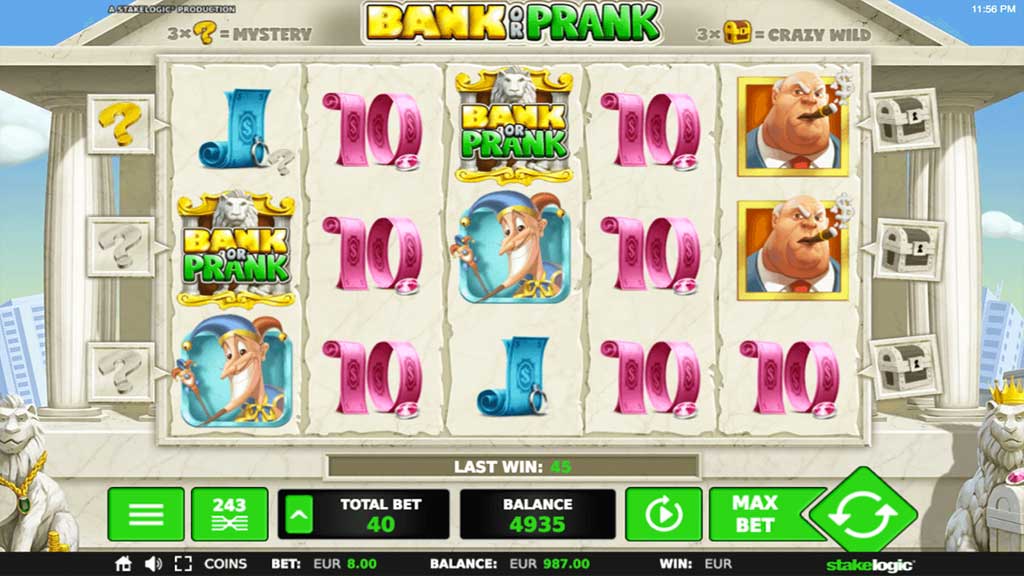 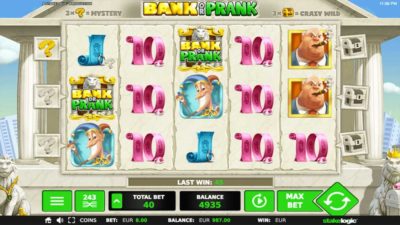 StakeLogic has just introduced a new slot title into the market called “Bank or Prank“. Stake Logic has produced some great titles for players and these include Tropical Adventure and Midnight Rush.

This new addition to their game library is an interesting one for those who like unique slot games. The Novomatic Group is the parent company of StakeLogic.

In “Bank or Prank“, players are trying to help out a local thief get away with a big haul from the bank. With the traditional five reels, this slot title gives players 243 ways to win every time they spin the wheel.

Players can spend from 40p and £40 on every spin. The traditional symbols in play range from the ace to the ten. The high-value symbols include the security van, the banker, the money, and the thief. Landing the bank is going to earn players up to 400 coins depending on how many show up.

The game's Wild symbol is a gold coin. It only appears in the second, third, and fourth seals. It can be used to replace any symbol in a combination. Additionally, it is important when players want to unlock the special bonus features of the game.

There are two special features in the game. The first one is the Mystery Reward Feature. When spinning the reels, the player will notice that reel one symbols sometimes have a question mark attached. When these symbols match to a position with a box beside it, they light. When all three boxes are lit, a special feature is activated.

The Free Spins Feature works on the same principle but works only with the treasure chest symbols on reel five. Once all have lit up, players will get ten free spins with additional wilds on the stack. There is a bit of twist in the game though. There is a bomb symbol that will disrupt any player's attempt to win. If it shows up, adjacent boxes will be turned off. So players will not want to keep spinning to avoid the bomb from showing up. This is yet another cool slot game from StakeLogic which provides players with decent gameplay, a free spins feature and the constant thrill of being not too far away from breaking the bank and getting rich.

Hurray! There is a competition going between users of our site!
You have to do nothing, but browse out site, and win a daily prize. Click here to read more.
You current ranking:
Time Left: 19h 40m 46s