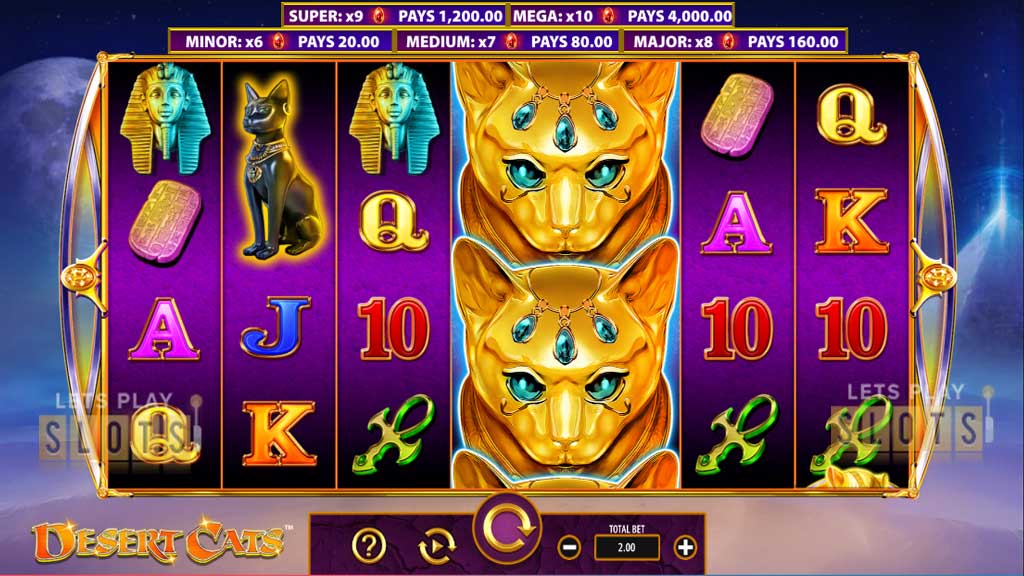 WMS has recently launched its latest online slot called “Desert Cats”. Taking players to Ancient Egypt, they will be seeking to get the holy cats of Egypt to bless them. Because of the seven reels and 50 paylines, it should be possible to win at least once. Combined with the special features, players have a chance to get 2,000 times their stake.

The Desert Cats slot game looks very intriguing. Anyone who’s familiar with WMS games will know that their games have some cool graphics and Desert Cats is no different. It seems like that the slot game fits better in a land-based casino but it does work well as an online slot game. The basic low-paying symbols are the card symbols which is common in most online slot games.

The more higher-paying symbols include Bastet, stone tablets, ankh crosses, death masks, lions and an Egyptian woman. The last two symbols will give players 200 times their stake if they get seven on a pay line.

The lion symbol also happens to be the wild symbol. It will replace most of the symbols that players need to get a winning combination. The only symbol that they don’t replace is the golden lion. The great thing about the wilds is that they can appear in a 2×2 size. If players get this larger symbol, it may appear with gems.

In the base game, two adjacent reels may end up being replaced by reels that only have a 2×2 wilds. These have gems and they can be collected to win jackpot prizes. The main idea is that the more gems that players collect, the bigger the jackpot.

Hurray! There is a competition going between users of our site!
You have to do nothing, but browse out site, and win a daily prize. Click here to read more.
You current ranking:
Time Left: 2h 16m 0s