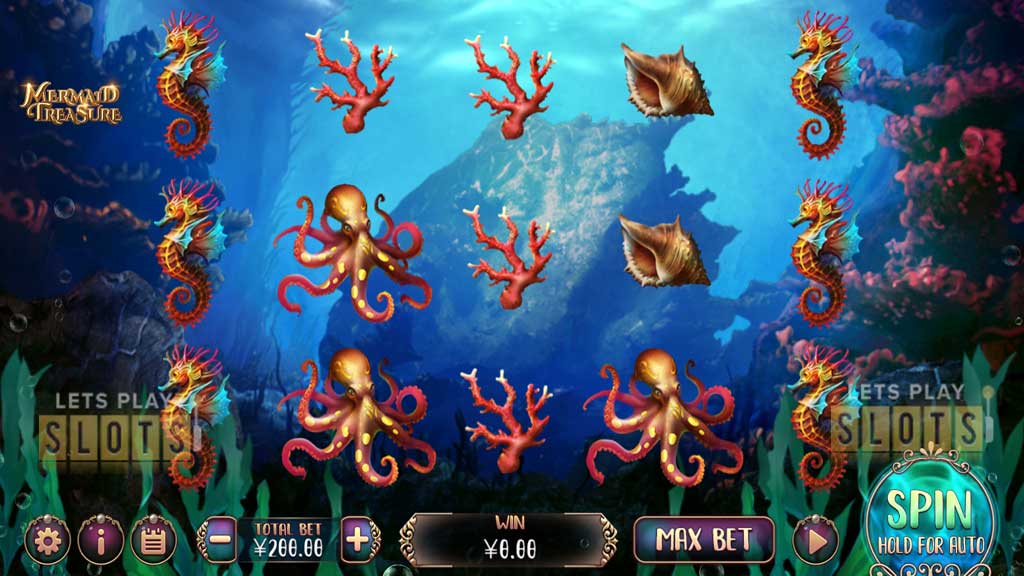 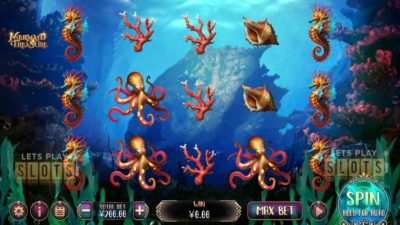 Down in the depths of the vast oceans, sunken ships from all ages can be found. The treasures of the past are in the deep and Xin Gaming has come out with a new game where players will hunt for “Mermaid Treasure“. The mermaid will provide her assistance to those brave players who are willing to take the chance and search for hidden wealth under the ocean.

Players who start this game will be immediately taken to the ocean floor. They will find sparse vegetation and many rocks. There will also be some fish swimming about with minimal light filtering through the water. This is combined with soothing and mysterious background music. The entire effect is to ensure that players will have a relaxed time under water.

The grid is placed in the middle of the screen. It has the traditional five reels and three rows that many slot machines have. For this game, there are 10 fixed paylines to claim a win on. The symbols on display on the reels are of the various creatures of the deep. This includes everything from bright tropical fish to seahorses. The most valuable symbol though is the Mermaid, with five of her giving players 1,000 times their stake. The RTP is set at a decent 96.15 percent which should give players enough of an incentive to play.

Players who are looking for something more than the base game will be happy to know that this game has some special features. The Mermaid is the most rewarding symbol because she is the Wild symbol for the game. This means that she can substitute for any symbol in a winning combination. Five of her will give out a massive prize but you can also get big rewards even if you get two of her.

One bonus that happens when two Wilds match is that the entire reels which they occupy will fully become Wild. This can potentially mean that players will have a sudden influx of wins. But that is not all. It will also trigger the Free Respin. The great thing about this is that the duration of the free spins depends on the Wild symbols. Every spin without a win will see the Wild symbols drop down one row. The spins will continue until all the Mermaid Symbols are gone.

Overall, this is a nice little game with minimal complications. Do give it a few spins when it shows up at your favorite real money casino.

Hurray! There is a competition going between users of our site!
You have to do nothing, but browse out site, and win a daily prize. Click here to read more.
You current ranking:
Time Left: 6h 30m 12s