Yggdrasil Gaming Gets Players To Dig Deep With “Moley Moolah!” 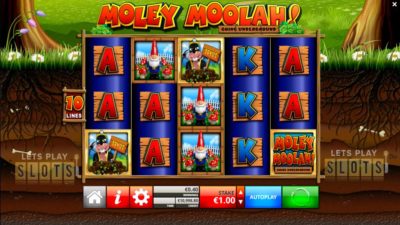 Yggdrasil Gaming has come out with an interesting new slot titled “Moley Moolah“. This game takes players to a green meadow and gets them to explore the ground underneath. This is where they meet the star of the show: a cute little mole. The nice cartoon visuals get players into a playful mood which is helped by the background music which sounds like a circus melody and xylophone notes.

The game features the basic five reel grid setup. There are 10 paylines for players to work with. The betting range for this game is good as wagers start from $0.20 and go up to $100. This is a decent spread and can potentially give players a big payout. The maximum cash jackpot for this game is $5,000. However, the game has a low RTP of 95.74 percent.

The game has a nice mix of symbols. There are the card royals which are the low value symbols. The more valuable symbols come in the form of a hard hat, mining tools, sunflowers, and a garden gnome. Two special symbols add to the intrigue in this game. The most valuable symbol in the bunch is the Moley Moolah symbol. Players can get 50x their stake when they get five symbols.

The game does have a few special features to make things more exciting. First, there is the crate of dynamites symbol. This is the game’s Wild symbol and it substitutes for any regular symbol in the game.

The other special symbol is the mole with acorns. It is the bonus symbol and it only appears on reels 1, 3, and 5. When three of them appear, players get 15 free spins. Players will be able to see a new symbol come into play during these spins. This is the acorn symbol and the game tracks them when they appear.

Players will want to collect them because of the bonuses. Players who get five acorns will be able to get extra spins. If a player gets 20 acorns collected, they will get 250x their stake as a reward. Finally, there is a random chance that a mole appears during any spin. This marks the appearance of the Wild Reel feature. This can turn random symbols into Wilds for more wins.

Go ahead and give Moley Moolah a few spins when it shows up at your online casino.

Hurray! There is a competition going between users of our site!
You have to do nothing, but browse out site, and win a daily prize. Click here to read more.
You current ranking:
Time Left: 42m 38s