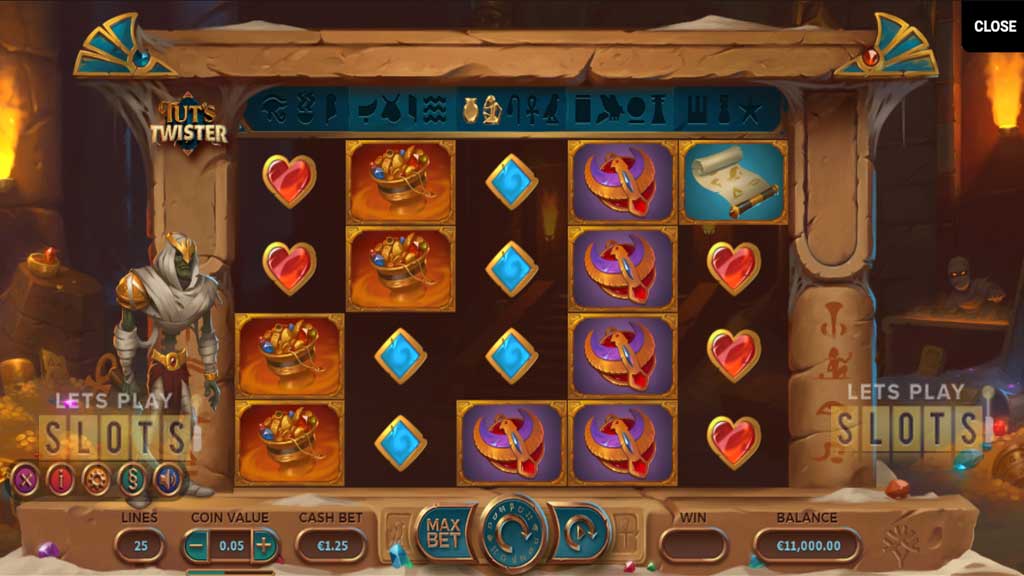 The new slot is based on an ancient Egyptian theme and is a five reel, 25 payline game. This slot takes players on a journey to explore Tutankhamen’s tomb in hopes of finding great treasures. They are helped by a magical twister that can bring them a big jackpot if they are lucky.

Tut’s Twister follows all the basic rules of slot games. Players essentially hope to get winning combinations starting from left to right. The visuals are very Egyptian and the mysterious music in the background adds to the atmosphere of the game.

As for the symbols, the low-paying ones are the anachronistic card symbols. The more rewarding symbols are the treasures found in the tomb: the scroll, the ring, the necklace, and the bowl of coins. The coin bowl is the most rewarding, with players hoping to hit the jackpot when they get five of them in a payline. Besides the symbols, there are hieroglyphs that players can collect for additional bonuses.

There is also one special symbol. It is the Wild and it can act as other symbols in the payline. This can help a lot when players want to get a good winning combination. However, the Wild also provides some special bonuses.

Whenever a Wild appears, players can randomly get prizes. Players can win a big cash jackpot immediately; get a hieroglyph, or another Wild. Getting two Wilds is important because it activates the Tut’s Twister feature. A magical twister will appear in the left reel with a Wild on it.

For every Wild on the screen, a multiplier is given and will last while the twister is active. Then players get free spins that will drag in wilds with every spin. These free spins are over when all the Wilds have been consumed, though new wilds can still appear during these free spins. While this is going on, the twister will act as a Wild reel, making it even more likely for players to win something.

One interesting feature of the game is that the appearance of two Wilds is not the only way to activate the twister. Players collect hieroglyphs during the game and they are placed above a reel. When the reel’s hieroglyphs are complete, they will be able to get a free twister in that reel. Overall, this game is a great little experience that players should try out.

Hurray! There is a competition going between users of our site!
You have to do nothing, but browse out site, and win a daily prize. Click here to read more.
You current ranking:
Time Left: 13h 32m 24s
Gambling is for 18+ though some countries may have other restrictions...Remember you should always Gamble Responsibly
We use cookies to ensure that we give you the best experience on our website. If you continue to use this site you agree to allow us to use cookies, in accordance with our Terms & Conditions.Agree & Close