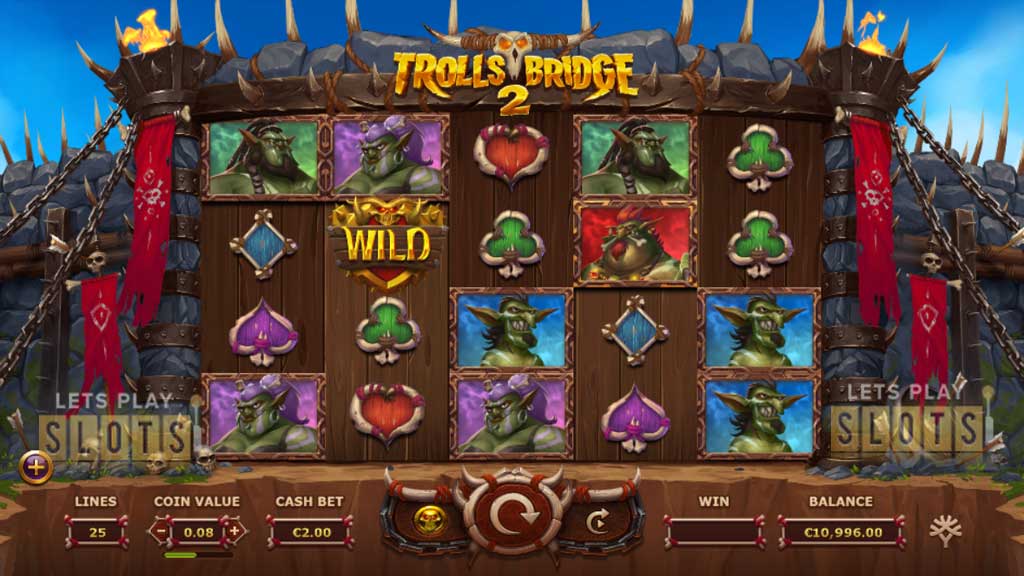 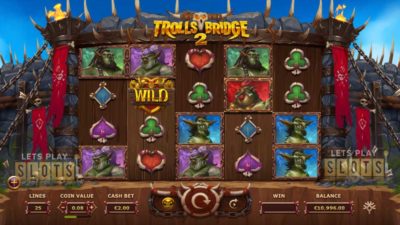 Yggdrasil Gaming came out with a great slot when its Christmas release Trolls Bridge. The trolls provided some fun times when they first came out, thanks to great gameplay and fun visuals.

Based on the success of the first game, the software developer has decided to come out with version 2.

Trolls Bridge 2 is an improvement on the original as the menacing monsters are bigger and badder.

Trolls Bridge 2 has five reels and 25 paylines. For those who played the original, they will notice differences with the base game.

Mostly it is the darker feel in the graphics and the soundtrack. Players will see the reels encased in spikes and chains as they spin.

For the symbols, they stay mostly the same. The low-value symbols are the card suits. This includes diamonds, clubs, spades and hearts. The four trolls return, though they look a bit worse for wear. They also appear as either 2×2 symbols or 2×4 symbols. The most valuable of the lot is the red-haired troll and it can reward players 20 times their stake if there are five of it on a payline. There is also a wild symbol that acts as other symbols during the base game and the bonus game.

What really made the original Trolls Bridge fun was the bonuses and its sequel is not skimping out on bonuses. The free spins symbol is a skull and it triggers free spins when three or more are on the payline. Players can potentially get up to 10 free spins.

Besides the free spins, players get to pick up to five bonus features that are active during those free spins. The sequel has 18 for players to pick from. They are given as a choice before the free spins begin. They include things like two extra free spins and two random wilds on every free spin. They also make it easier to win by turning a particular troll into a wild symbol.

The game also features the Golden Bet feature. This allows players to get one extra feature pick when they enter the Free Spins feature. However, it adds to a player’s stake making the spins cost an additional 10 coins. Another feature is the Bonus Cauldron feature which is triggered when a cauldron lands on the fifth reel. It just gives a random prize to the player. Finally, the Bonus Stone feature randomly gives players a multiplier to a winning spin.

Overall, Trolls Bridge 2 looks to be a whole lot of fun. Players should give it a spin when it arrives at their favourite online casino.

Hurray! There is a competition going between users of our site!
You have to do nothing, but browse out site, and win a daily prize. Click here to read more.
You current ranking:
Time Left: 21h 14m 54s
Gambling is for 18+ though some countries may have other restrictions...Remember you should always Gamble Responsibly
We use cookies to ensure that we give you the best experience on our website. If you continue to use this site you agree to allow us to use cookies, in accordance with our Terms & Conditions.Agree & Close