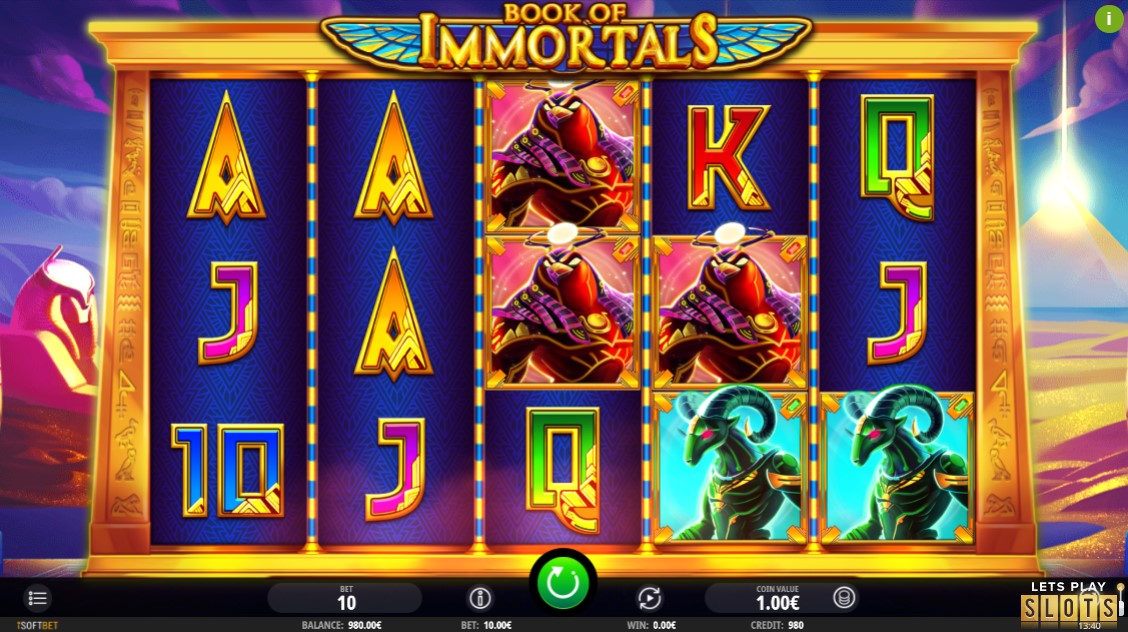 Ancient Egypt is at the forefront of this iSoftBet slot, and it’s portraying it in the best way possible. Book of Immortals will have you impressed with all of its graphics, its inbuilt Scarab Swap, Free Spins and the entertaining soundtrack.

Best Casinos to Play Book of Immortals for Real Money :

Having played Book of Immortals from iSoftBet, I can honestly say that I wasn’t really expecting such a unique take on the Ancient Egypt theme. After all, we all know how done to death this particular theme is, right? It’s getting difficult for me to imagine other ways in which developers can integrate it into slots. Yet, Book of Immortals is one of those offerings that really brings the theme to life on your screen. 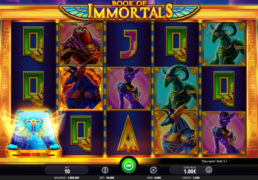 Playing this iSoftBet slot will present you with a layout of five reels and three rows altogether. Across this layout, you’ll also be able to place bets on 10 paylines, which are all set in position. You’re able to customise your bet by using the relevant button at the bottom of the screen. This gives you the option of choosing a coin value between €0.01 and €1 per line, resulting in a maximum bet possibility of €10 per spin.

The first of this game’s symbols appearing on its reels are the regularly-seen playing card icons running from the blue 10 through to the yellow A. Then come the symbols of four Egyptian gods, starting with the cat goddess, Bastet. She is able to multiply your stake by up to 50x over. Then comes the god Khnum, with his goat head. You’ll also see Horus on the reels, who can multiply your bet by up to 100x, while the highest-paying god is Anubis. He offers maximum rewards of 150x your stake. 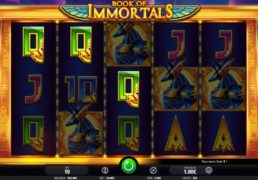 It’s always fun to find an online slot game with a scatter wild symbol in it, which Book of Immortals features. This is present in the shape of the scarab tablet. As a wild first of all, it will substitute for all other standard symbols to help you with forming winning combinations.

It’s perhaps the secondary feature of this symbol that will appeal more so though, because whenever three or more show up on the reels in any position, you’ll receive 10 free spins as a reward. During this feature round, a special symbol will be chosen at random on the very top reel of the free spins set. This one is then able to expand and form wins on all 10 lines on non-adjacent reels.

The last feature of this iSoftBet slot is the Scarab Swap addition. During any standard base game spin, this can come into action. It sees scarabs fly across the reels and land on top of up to 10 symbols. After doing so, they will convert all the symbols landed on into one and the same for a potentially larger win. 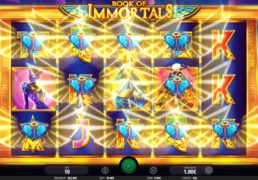 If we’re talking greatest iSoftBet games, then surely Book of Immortals has to rank up there, I’d say. The graphics are enough to keep you visually entertained, but when you start spinning the reels and triggering special features along the way, it becomes exceptionally more intriguing. I love it, and I’m almost positive that you will, too.

Ancient Egypt is at the forefront of this iSoftBet slot, and it’s portraying it in the best way possible. Book of Immortals will have you impressed with all of its graphics, its inbuilt Scarab Swap, Free Spins and the entertaining soundtrack.

Hurray! There is a competition going between users of our site!
You have to do nothing, but browse out site, and win a daily prize. Click here to read more.
You current ranking:
Time Left: 10h 13m 44s