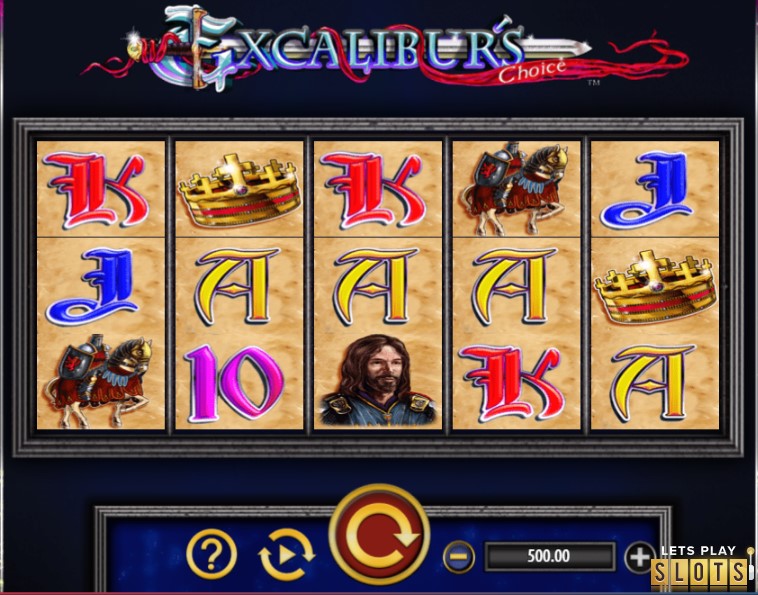 Why should Arthur be the one to make all the choices? Surely, it’s time to let Excalibur make some decisions. This Barcrest slot seems to think so, and when you play it, you should be sure to keep an eye out for the Scatter symbol and subsequent Free Spins.

It’s always seemed to me that while other software developers are constantly updating and moving forward with their slot games, graphics and technology, Barcrest is the one that seems to delight in sticking to its guns. I’m not really sure if this is something that Barcrest should be too proud of though, because looking at Excalibur’s Choice, it could definitely be a slot game from the late 90s. The graphics are so dated, and the inbuilt features are fairly basic, too. 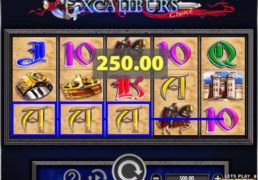 Excalibur’s Choice features a layout that consists of a total of five reels, with three rows to join them. Barcrest has chosen to add a total of 10 paylines into the slot as well, which you don’t have any option to customise. Your wager is still changeable though, with values between €0.10 and €500 able to be selected from.

The graphics in the game aren’t really the best that I’ve seen, which is probably part of the overall problem that I have with Excalibur’s Choice. Symbols begin with standard playing card icons of 10 through to A, all displayed in different colours. Then there’s a symbol of a ring and another of crown, both of which can pay out up to a maximum of €25,000. A knight on his horse comes next, while the castle can also be seen as a symbol. Arthur provides the game’s highest standard icon, rewarding you with up to €250,000.

While the game does incorporate a wild symbol, this wild is also its scatter addition. Of course, that symbol is of Excalibur itself. Scatters can show up anywhere on the reels and still reward you with a pay-out, and as a wild, it will substitute for any other standard symbol upon the reels. Five of this symbol showing up anywhere can pay out up to €100,000.

Furthermore, if you spin three, four or five of the scattered wild symbol into view, you’ll trigger the game’s free spins round. In all my time of playing Excalibur’s Choice though, I only managed to activate this feature round once. During the free spins feature, a symbol will randomly be selected to become the round’s special symbol, which expands on all active lines. 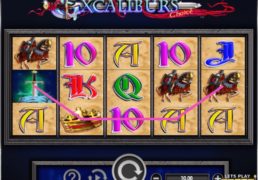 On the whole, Excalibur’s Choice is a decent online slot, but it just fails in certain areas, like it’s graphics and inbuilt special features. I would have liked to have seen more from Barcrest, if I’m honest.

Why should Arthur be the one to make all the choices? Surely, it’s time to let Excalibur make some decisions. This Barcrest slot seems to think so, and when you play it, you should be sure to keep an eye out for the Scatter symbol and subsequent Free Spins.

Hurray! There is a competition going between users of our site!
You have to do nothing, but browse out site, and win a daily prize. Click here to read more.
You current ranking:
Time Left: 20h 47m 57s
Gambling is for 18+ though some countries may have other restrictions...Remember you should always Gamble Responsibly
We use cookies to ensure that we give you the best experience on our website. If you continue to use this site you agree to allow us to use cookies, in accordance with our Terms & Conditions.Agree & Close