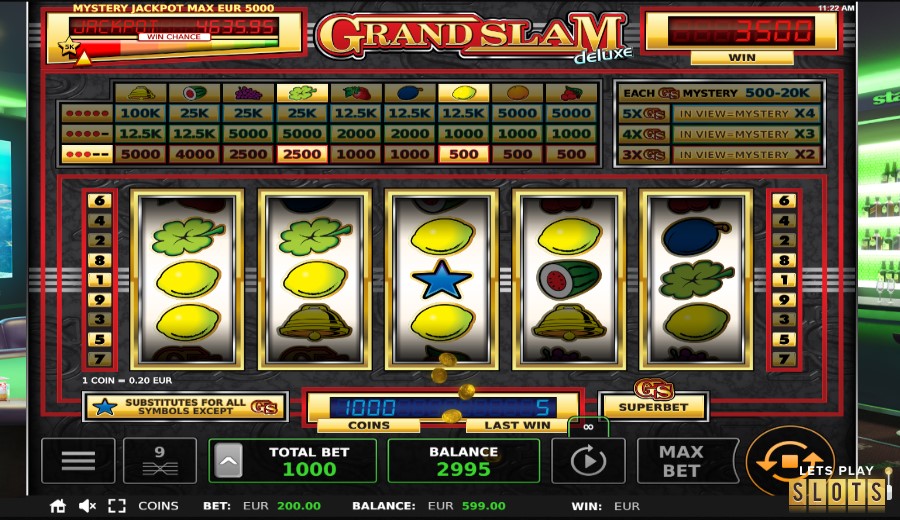 The Grand Slam Deluxe slot game brings the retro imagery of traditional slots to the forefront. Because of this, you’ll see fruit symbols on its reels and StakeLogic has made the deluxe version feature a mystery progressive jackpot for you to play for. 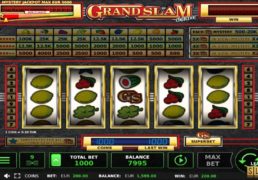 If you’re a fan of retro casino slot games, then there’s a chance that Grand Slam Deluxe from StakeLogic will appeal to you as it did to me. If I’m honest, I love being reminded of decades ago when fruit machines would be the only options available to play in casinos, and this slot does exactly that. There’s much more to this slot game than meets the eye as well, because not only does it have a five-reel, three-row layout, but you’ve got the chance to win a progressive jackpot as well. You get to bet on nine pay lines and there’s the Superbet feature which also stands out. Bets between €0.20 and €200 per spin can be placed and various other perks made this game quite a winner for me. 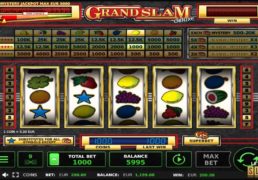 The main base game of Grand Slam Deluxe is quite standard, featuring basic fruit symbols. The paytable is on display across the top of the screen, too. So, it’s easy to see that the cherries, lemon and orange symbols are the lowest paying, followed by the plum, strawberry, four-leaf clover, bunch of grapes, watermelon and finally, the golden bell. It’s also got quite an arcade-sounding set of noises that play while you’re spinning the reels.

As well as the basic symbols, it’s quite nice to see a wild symbol on the reels, too. And in my experience of playing the slot, this showed up quite frequently to assist with forming wins by substituting for other symbols. It’s the blue star that represents this one on the reels.

You’re also able to make one or two adjustments with the game, such as whether or not fast spin is active and the ability to use an autospin function. 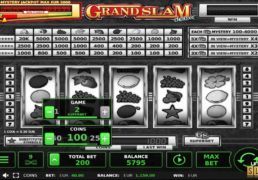 Probably my favourite part of this slot game is the fact that it includes Grand Slam Mystery Win Symbols. These can appear in the base game and in Superbet mode. During the base game, three or more of these appearing scattered anywhere rewards you with a mystery win. This can be anything up to 10,000 coins. Meanwhile, in Superbet mode, every Grand Slam icon making an appearance will provide you with a mystery reward.

There’s also the inclusion of the progressive jackpot in this slot, too. The minimum guaranteed payout from this is €500 and a guaranteed mystery jackpot payout when the sum reaches €5,000. The payout can come at any time, but the higher your wager is, the stronger your chances are of winning it, making the game that much more appealing.

I’m never quite sure if retro games like this can ever grasp a wide audience. I mean, I love them, but they can often be fairly lack lustre. Yet, StakeLogic doesn’t fall into this pit with Grand Slam Deluxe. Instead, there’s a couple of impressive inbuilt features to trigger, some decent graphics on display and, of course, that progressive jackpot is thoroughly appealing. Perhaps it’s not a game for those who are more interested in strong graphics and masses of bonus rounds, but it makes for a great alternative to the throng of games already available.

The Grand Slam Deluxe slot game brings the retro imagery of traditional slots to the forefront. Because of this, you’ll see fruit symbols on its reels and StakeLogic has made the deluxe version feature a mystery progressive jackpot for you to play for.

Hurray! There is a competition going between users of our site!
You have to do nothing, but browse out site, and win a daily prize. Click here to read more.
You current ranking:
Time Left: 13h 45m 46s