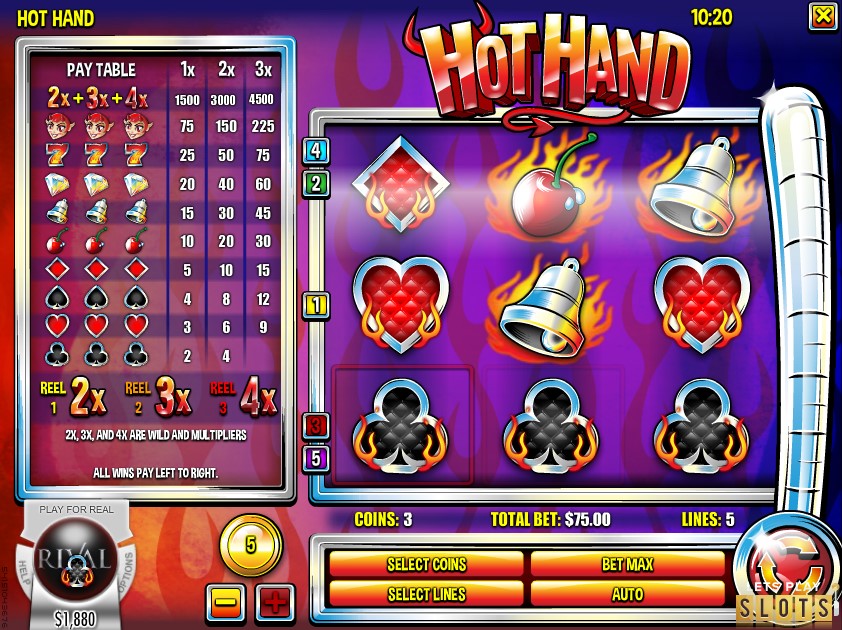 Hot Hand doesn’t provide much in terms of special features, but it does ensure that you get to enjoy Wild Multipliers as you spin its reels. You’ll find it to be a compelling enough 3-reel offering from the Rival Gaming brand.

I wasn’t entirely sure if I was ready or interested in playing the Hot Hand slot machine game from Rival. Don’t get me wrong, I have nothing against this developer’s games. I actually quite enjoy them most of the time. It’s just that there aren’t many 3-reel slots that can hold my attention for that long these days. Hot Hand does have this sort of setup, but it also incorporates some intriguing graphics and a couple of inbuilt features to heighten the gaming experience, I found. 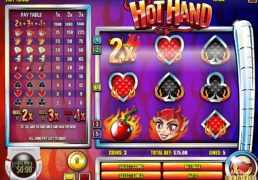 Accessing this slot game, you’ll see a layout that features three reels and three rows altogether. Across this setup, Rival has decided to add a total of five paylines, which you do have the option of adjusting with the relevant button. You’re also able to change your bet, with coin values of between €0.01 and €5 being available. The amount of coins that you bet per spin is also changeable between one and three. Therefore, the highest bet possibility in Hot Hand is €75 per spin.

The visual side of this slot game is quite impressive for a three-reel offering, with the first symbols on its reels being present in the form of playing card suit images. The red diamond can multiply your wager by up to 15 times. Then comes the icon of the cherries, followed by the silver bell. A shiny diamond can also be seen on the reels. A flaming number 7 is also visible on the reels, as can the icon of the devil. This one is the highest paying standard symbol, able to reward you with up to 225 times your stake. 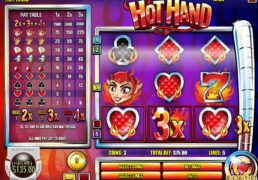 Naturally, if any of these symbols appear on their respective reels, they will first of all substitute for all other standard icons. At the same time, if they do form part of a win, then they will multiply the pay-out that you receive for such.

It’s true that Hot Hand is quite a basic online slot game, but does this really matter in the grand scheme of things? Not everybody likes the cram-packed video slots, so Rival has made quite the impactful 3-reel offering with this one. I enjoy the multiplying wilds that appear on the reels and the graphics stand out as being quite intriguing, too.

Hot Hand doesn’t provide much in terms of special features, but it does ensure that you get to enjoy Wild Multipliers as you spin its reels. You’ll find it to be a compelling enough 3-reel offering from the Rival Gaming brand.

Hurray! There is a competition going between users of our site!
You have to do nothing, but browse out site, and win a daily prize. Click here to read more.
You current ranking:
Time Left: 19h 21m 43s